OnePlus to add face-recognition unlock feature for the OnePlus 5 via Android Oreo software update with a newer user interface.

If anyone is not happy with the launch of OnePlus 5T, then, it is the OnePlus 5 users. According to the latest industry insider information, the company is adding the much-anticipated face unlock feature for the OnePlus 5 feature.

The company is already testing the new software and it is in the beta phase of testing. So, by January 2018 we can expect Android Oreo update with all new improved feature.

If we look at the differences between the OnePlus 5 and the OnePlus 5T. The OnePlus 5 offers a 16:9 aspect ratio display with 1080p Full HD panel. The OnePlus 5T offers newer 2017 model 18:9 aspect ratio 6.0-inch FHD+ OLED panel, which offers better screen to body ratio with very narrow bezels. The one thing that is missing from this display is the HDR capability, the smartphone does not support either HDR 10 or Dolby Vision. 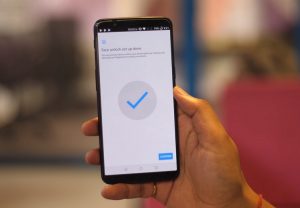 Both models do offer similar design language with an all-metal unibody design. However, the OnePlus 5T is a tad bit bigger, which almost goes unnoticed, until you compared them by keeping them beside.

Even with respect to the camera, the OnePlus 5 offers a dual rear-facing camera with 16 MP wide-angle lens offering F/1.7 aperture and a 20 MP telephoto lens with F/2.3 aperture. This camera setup does offer X1.6 lossless zoom, potrait mode and 4K video recording capability. The OnePlus 5T has a similar 16 + 20 MP dual rear-facing camera setup with a different implementation. Both sensors on the OnePlus 5T offers a F/1.7 aperture, so, there will be no optical lossless zooming capability. However, this setup does offer improved low light photography compared to OnePlus 5. For the selfie camera, both smartphones are equipped with a 16 MP autofocus selfie shooter with 1080p video recording capability.

OnePlus 5 and 5T are equipped with a 3300 mAh sealed battery with Dash charging capability (industry best) which can charge up to 60 percent in just 30 minutes.

However, both models are missing out on the features like IP rating for the water and dust resistance, wireless charging, and OIS for the main camera. Other than these features, the smartphone almost has everything, that one can expect from a flagship smartphone.

LG V30 India launch in December with ₹47,990 price tag
Is this the upcoming Xiaomi Mi 6?