The Indian Wire » Technology » Review: Google Pixel 2 XL, not as sweet as Oreo Google Pixel 2 XL is the greatest smartphone from the Google, however, it the device does miss on the "WOW" factor.

Finally, the time has come to share our final verdict on the latest hardware and software from Google. We had expected so much from the “flagship” smartphone from Google, however, this time the company has failed to impress us on every aspect. Initially, Apple used to get inspired by the new features after Android smartphones, and, now the Google has started to introduce features that are re-introduced by Apple. So, it’s like at least 4-year-old features with new software experience. So, here is our brief review on the Google Pixel 2 XL.

One may ask why is this hatred towards the Google Pixel 2 and Google Pixel 2 XL? The reason behind is its pricing, Google has priced their devices neck to neck with the premium Apple iPhone 8 and iPhone 8 Plus respectively. However, when it comes to after sale support, features and design these phones are far galaxies apart. Consider if you are paying for an Apple and got a potato, how do you feel?

Design: Starting with the design, the Google Pixel 2 XL features a subtle design language, it follows the last generation pixel with making room for small changes. The all-metal unibody is coated with a plastic paint, which reduces the fingerprints registry on the body and makes it look cool. However, one has to be careful, as the device might break if you put a lot of pressure (so, never keep your Pixel 2 XL on your back denim pocket and sit).

The Kind Blue, Just Black, and Clearly White are some fancy colours, which might attract the teenage audience. However, Gold and silver are always my choices of colours which goes well with the mass as well as the class audience. 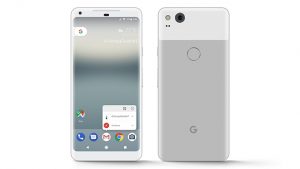 Hardware: Once again, the hardware on the Pixel 2 XL is pretty solid, one can say, its the best in the Android Market. Once again, it’s nothing new. The device is powered by a Qualcomm Snapdragon 835 SoC, with 4 GB RAM and 64 or 128 GB onboard storage without an SD card slot can offer the best Android user experience. However, smartphones like OnePlus 5 and Nokia 8 also offers identical specifications with an additional touch like dual camera, 3.5 mm headphone jack and some unique features to make it stand out in the crowd. In fact, one can bye both OnePlus 5(INR 34,000) and Nokia 8(INR 37,000) instead of an entry level Pixel 2 XL smartphone (INR 73,000).

So, if you are looking for a solid Android smartphone, then Pixel 2 XL is a right choice, however, the price tag made us think twice, as at INR 73,000 there are many things that one can get.

Software: This is the main reason to go with the Google Pixel 2 XL. The stock Android user experience with fastest Android updates and security update makes any tech enthusiasts happy. So, we can proudly say that this is the most secured Android smartphone in the market, and Google will fix any vulnerability in just a few days, as the third party OEM’s takes months to deliver the same. The Pixel 2 XL also has an integrated Google assistance, which can be triggered by squeezing the phone (HTC’s technology)

Display: Google Pixel 2 XL is equipped with a state of the art QHD+ resolution POLED display with all new 18:9 aspect ratio, which has become the industry standard. However, when it comes to the display quality, it doesnt stand tall against the odds of Samsung’s Super AMOLED technology. Many users have reported the Burn-In issue, Blueish tint and band viewing angles. So, even Google has accepted that there is something wrong with their display and started an investigation around the same. So, a new display norms with a low-quality display at a preposterous price tag doesnt make sense at all.

So, if you are ok with the above-mentioned shortcomings, then go with the Pixel 2 XL or you have plenty of choices on Android as well as iOS. 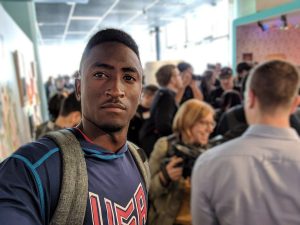 Camera: Google has done the commedable job in terms of camera capability. The rear 12 MP single camera with OIS and 4K video recording scores a perfect 99 points out of 100, making it the best smartphone camera in the world. The bokeh effect is also achieved using software algorithm and the front-facing 8 MP selfie camera also offers the same level bokeh effect, making it a one of kind.

However, compared to the competition from the other brands like LG, Huawei, Apple, and Samsung the trending dual camera setup is missing, which could have offered features like X2 optical zooms like Apple or Samsung or a wide angle lens like Huawei and LG. So, camera one the Pixel 2 XL is one of the strongest aspects of the smartphone, but reiterating our main concern, there is nothing cutting edge here to appreciate the efforts from the OEM.

Final verdict: This can be divided into two parts, as pros and cons

To conclude, Google Pixel 2 XL is a great smartphone that Google has ever created. But in the competitive market faster Android updates with a good camera aren’t going to stand out. Google needs to come up with new strategy and technology if they want to price their device as much as the Apple counterpart.

Moto G6 Play coming along with the Moto G6 and G6 Plus
Vodafone partners with Micromax, launches 4G smartphone for INR 999