Upcoming premium flagship smartphone from Samsung AKA, the Samsung Galaxy S9 is expected to offer up to 90% screen to body ratio.

We all know that the Samsung is all set to launch their premium flagship smartphone in the Q1 of 2018. Currently, there are even rumours about the fact that, the Korean smartphone market might showcase the device in MWC 2018, which will be held in February. However, at that time frame the device might not be available for purchase, but if the smartphone maker pulls off something out of the box, the company should be able to maintain the hype until the public release. So, here are the complete speculations on the upcoming Samsung Galaxy S9.

According to speculations, the company might completely ditch the bottom bezel and there will narrow bezel on the top, which houses most of the sensors which are required for the optimal smartphone functionality. 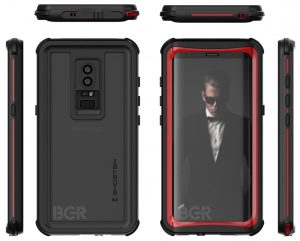 Even with respect to technical specifications, the Samsung Galaxy S9 will be the first smartphone to ship with the upcoming Qualcomm Snapdragon 845 Octa-core Mobile Solution or Exynos 8895 Octa-core Mobile Solution (depending on the market). Both models will be offer at least 6 GB LPDDR4x RAM and 64 GB onboard flash storage with dual SIM card slots with next-generation LTE modem with 4G LTE and VoLte capability on both the slots.

In terms of camera capability, the smartphone will be the 2nd Samsung flagship model to feature dual rear-facing camera setup with one wide angle lens and a telephoto lens (just like the one found on the Note 8). This might also be the first Android smartphone to support native 4K video recording capability up to 60 frames per second. The company is also expected to replace the fingerprint scanner (received a lot of criticism for the fingerprint scanner placement on the Galaxy S8, S8+, and Note 8).

Looking at the Samsung’s history, the smartphone maker is also expected to offer features like IP68 rating for the water and dust resistance, USB type C port for fast charging and data syncing, 3.5 mm headphone jack for audiophiles, NFC for the wireless payments, and lastly, the device is also expected to feature wireless charging capabilities.

So, what do you think about the upcoming Samsung Galaxy S9? Share your views in the comment box.