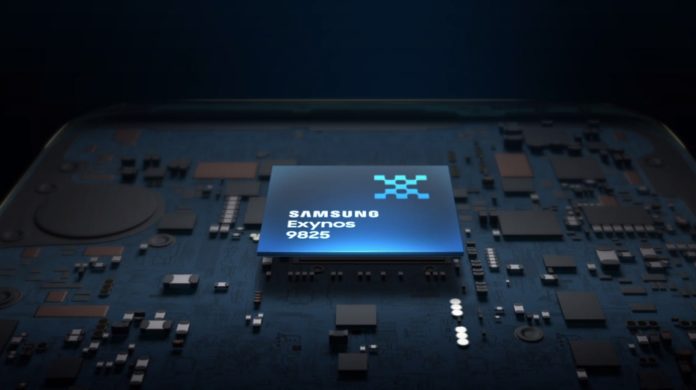 The Samsung Exynos 9825 is based on 7nm manufacturing process and is said to be the first mobile chip to use EUV (extreme ultraviolet lithography) technology. Samsung says EUV allows the company to “leverage extreme ultraviolet wavelengths to print finer circuits and develop a faster and more power efficient processor.”

Successor to the 8nm Exynos 9820 that powers the Galaxy S10-series, the new chipset comes with an improved process node. It is made on 7nm process, same as the Qualcomm Snapdragon 855 SoC and Huawei’s Kirin 980 SoC. Still, there is a small difference. The Exynos 9825 is the first EUV (Extreme ultraviolet lithography) chip that is said to bring some additional benefits. Compared to the Exynos 9820, Samsung is promising up to 20-30 percent higher transistor performance, while consuming 30-50 percent less power.

The Exynos 9825 SoC has an octa-core setup with tri-cluster CPU configuration. There are two custom CPU cores and two Cortex-A75 cores to ensure optimum performance. And for efficiency, you have four Cortex-A55 cores. Sadly, Samsung hasn’t revealed clock speeds of the CPU cores on the new chipset. In terms of GPU, you get ARM Mali-G76 with 12 clusters, which is the same as seen on the Exynos 9820.

The new chipset comes with multi-format codec (MFC). It supports video encoding of up to 8K at 30fps, 4K encoding at 150fps and 10-bit HEVC (H.265) codec. There is support for 4K HDR10+ as well. The Exynos 9825 supports up to 4K UHD resolutions (4096x2160pixels), UFS 3.0 storage, and LPDDR4x RAM support. It’s strange that the new chipset doesn’t support Samsung’s LPDDR5 DRAM. And for camera, it supports dual 16-megapixel + 16-megapixel setup, and a single 22-megapixel front and rear unit.