We live in a time where one can’t help but be surrounded by technology. One of the biggest innovations of this decade – the Smartphone, has helped make information easily accessible. It has also helped inspire and push advances in wearable technology, a form of technology that at one point seemed possible only in science-fiction. Fast forward to 2018 and wearable technology (Smart bands and Smartwatches), connected devices, Internet of Things (IoT) and artificial intelligence are the biggest buzzwords in the tech industry. These broadly encompass the fast-evolving wearables & smart device eco-system.

Global shipments of wearable devices are on track to grow 15.1% in 2018, totalling 132.9 million units over the course of the year. The overall market is also expected to grow at a CAGR of 13.4% over the next five years, closing in at 219.4 million units shipped in 2022, according to the International Data Corporation (IDC). 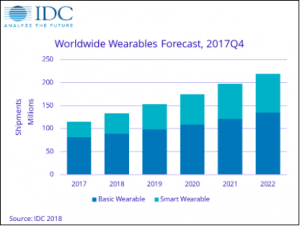 While companies like Apple and Fitbit will continue to focus on advancing specific use cases, such as fitness and sports tracking, Hybrid Smartwatch makers will be pushing on styling, aesthetics and the subtle integration of smart-tech into their watches to entice the consumer to shift from their traditional analogue watches. This segment is currently dominated by the likes of Fossil Group, Garmin and Skagen with newer start-up’s such as Noerden and Misfit making huge headway in this promising segment.

As the global tech world pays greater attention to the advances made by Smartwatches and entices the consumers to make a leap of faith, Hybrid Smartwatches have been gaining momentum and are poised for an eventful future.

While companies like Apple and Fitbit will continue to focus on advancing specific use cases, such as fitness and sports tracking, Hybrid Smartwatch makers will be pushing on styling, aesthetics and the subtle integration of smart-tech into their watches to entice the consumer to shift from their traditional analogue watches. This segment is currently dominated by the likes of Fossil Group, Garmin and Skagen with newer start-up’s such as Noerden and Misfit making huge headway in this promising segment.

As the world of fitness and lifestyle slowly merge, so will the definition of a fitness wearable. Consumers will look for offerings that fulfil the function of both style and features coupled with an appealing value proposition.

Witnessing this emerging opportunity and thus taking the initiative to propel itself into a leading local player in the segment is a young start-up by the name of Sanzar Futureteq. ‘Futureteq’ is a combination of the words ‘Future’ and ‘Technology’ and signifies the ethos and direction of the company; The company endeavours to enhance people’s lives by providing innovative and easy to use wearables that facilitate user well-being and enhance their style quotient.

Sanzar Futureteq is promoted by two siblings – brother & sister duo of; Sanskar Sharma, a graduate of Indiana University – Bloomington, USA and Sanskriti J Sharma, a Fashion business student at the London College of Fashion. Having grown up in the household of a first-generation entrepreneur, it meant business was always their ambition and motivation. Being constantly surrounded by business jargons, debates and literature helped, as these influences inspired them to take the entrepreneurial plunge at a young age. Taking cues from the tech and fashion worlds respectively, and amalgamating them to create tech-friendly, fashion-forward products of desire is the start-up’s mantra.

The company’s first foray towards their mission is the Gekko GX1 – Hybrid Smartwatch – launching in July. The watch comes with a host of features that would appeal to individuals who want a trendy, yet rugged watch that provides fitness statistics and notifying capabilities. Additionally, the watch comes with a barometer, altitude measure, UV index and temperature display that would appeal to folks who enjoy the outdoors or who are just plain curious. The battery is where the GX1 truly stands out, as it requires nocharging, when compared to Digital Smartwatches. The GX1’s battery lasts an entire year and can be easily replaced at any local watch store.

The lifestyle aspect of the target audience was key to the design of the Gekko GX1 watch. The screen features a sapphire glass dial which is scratch resistant and provides great strength. Moreover, the sturdy design of the watch means it will endure any bumps and knocks that it may find its way. The watch scores very high on its aesthetics and provides the wearer a sense of machismo.

The fast-paced lifestyle of a GX1 customer mandates the watch to send timely alerts for calls, message or any notification on their social networks. Taking pictures is also made easy, as the GX1 can act as a remote control for picture-clicking via the user’s smartphone.

All these features would appeal to a wide consumer base of 15-30 year olds and given its competitive price of Rs. 4995/-, it is expected to be a huge success.