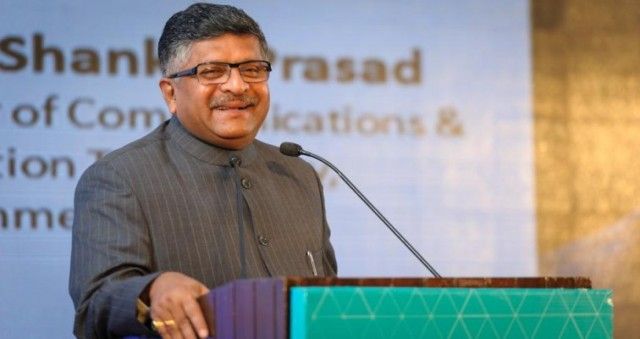 Shri Ravi Shankar Prasad, Minister for Communications, Electronics & Information Technology and Law & Justice, Government of India, in a recent interview said that India is already the second biggest manufacturer of mobile phones in the world. Now, even Apple is coming in a big way, Foxconn 2 and 3 are going to be established, initially in Sriperumbudur (Tamil Nadu). Also, Apple is also going to open its biggest state-of-the-art shop in Mumbai, and we all know that Samsung is withdrawing from China.

Ravi Shankar Prasad also said, “The biggest day for me will be to pick up an Apple phone and read, designed by Apple in California, assembled in India, replacing China. I see that happening soon.”

Pointing out the big companies’ inclination towards India he said that Samsung already has a very powerful presence in India. We have also already removed the open cell 5% customs duty. We had a meeting with all the top CEOs of the country and overseas. They had this teething trouble this has been resolved.

Regarding the status of Personal Data Protection (PDP) Bill, he said, “I am very keen to push India as a data refinery 1.3 billion Indians are generating massive data. The architecture of our data privacy law will soon go to the cabinet.”

A committee is in place to seek out the matter for the companies won’t give up data easily, owing to issues of privacy. The last word on data is yet to be heard. Let the committee’s recommendation come. It might need some legislative intervention because data business is an evolving business.

As in back the past, the WhatsApp has gone to the Supreme Court to challenge the issue of traceability even before the guidelines are out. According to him, Social media has empowered the people of India and the expansion of social media in India is a welcome development. But if anyone uses social media to defame, to abuse, to promote terrorism, to compromise India’s security, it is surely a matter to be taken note of and requires intervention.

Regarding the plan to tackle the issue of impersonal data he said that a committee under S Gopalakrishnan (Kris) has been already formed. Personal data is going to become a very big proposition in the coming future. How many taxis are there in this country? All that is data. Thus, we need to understand that data privacy laws concern the individual and impersonal data is different from that, which can be properly commercially used, exploited and also developed into a big industrial proposition. Therefore, when I talk of data refinery, data processing, data cleaning, this is going to become a huge enterprise in the coming years and I want India to become a huge center in that.

Regarding spectrum auctions to 5G spectrum he said:
They can happen this fiscal. There is already a recommendation of Trai (telecom regulator). As far as the operators are concerned, they need to be professional, they need to be competitive.