The Indian Wire » Technology » Vivo V9 vs Oppo F7 – Which smartphone is worth buying? 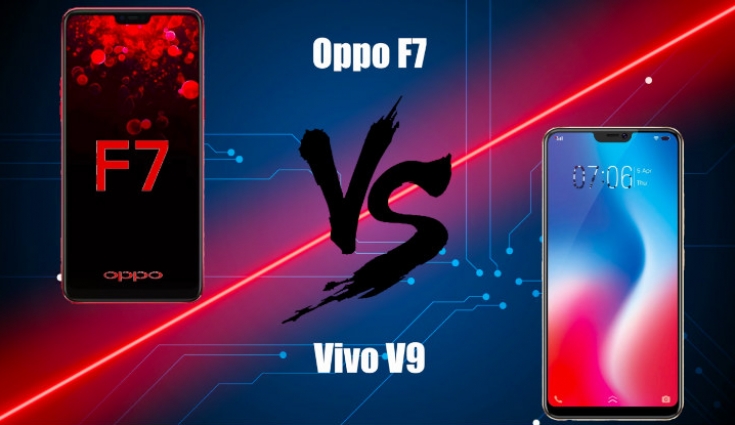 The Vivo V9 smartphone has a 6.3-inch display that has a 19: 9 aspect ratio – it’s most definitely an impressive screen with smooth bezel (top and edges) and a small chin. The V9’s display has a hot vowel – little red color is visible compared to other phones. Vivo also provides customization to use notes for third-party applications – you can choose which apps run full screen in 16: 9 or 18: 9 aspect ratios.

When it comes to performance and gaming, everything is running smoothly with Snapdragon 626 4GB RAM. Occasionally (with more than 20 apps running in the background) we saw some laziness while scrolling with 3D games or through Facebook feeds. Battery life is the best average, it can run from 9 a.m. to 6 p.m., but you have to charge twice a day.

V9 is a 24 MP front camera with AI beautification and AR stickers. We believe that Portrait mode also does his job well, you will also get a group selfie-mode in front camera. ‘Vivo V9′ also uses the front camera for Face Unlock and works well, though it does not have the ability to wake and unlock the screen in the form of Oppo F7. In the back side of Vivo V9, there is a 16 MP + 5 MP dual camera setup with an AI-powered. This gives the V9 an advantage over the Oppo F7 in delivering a superior bokeh effect. The picture taken from V9 is good information, it is very good to explore natural colors and shores. Vivo also offers the option to adjust the focus in an image – always a useful feature.

V9 is one of the first devices to come with Fun Touch OS 4.0 based on the latest Android 8.1. There are several handy features in the user interface such as game mode (disables notifications and reject incoming calls), iPhone X style gesture control and navigation and one hand mode.

The Oppo F7 smartphone has 6.23 inches, 19: 9 aspect notched screen. It has an impressive performance with wide viewing angles and rich colors. Oppo F7 allows you to control which apps run in an 18: 9 aspect ratio in case of blocking the interface. However, the lack of adaptation of incoming notifications icon due to notch in the Oppo.

In the case of chipsets, a MediaTek Helio P60 gives power to the F7 and proves to be a great artist. With 4 GB RAM, P60 is running smoothly. At one point, we had 30 apps running in the background while playing 3D games without any hesitation. Battery life is also fantastic – a single charge easily lasts for a whole day, which contains about 20% of the battery extra. The F7 has 16 MP Focus/1.8 in rear camera. The camera offers some crisp pictures, in low light, the quality of the photo beats one. Is a software-driven portrait mode that only works well. On the front it has 25 MP camera – while the number of megapixels is not really mattered, they pick estrangement themselves up for lovers’ interests.

Face Unlock works immediately (even in low light) and you can set the screen to wake up again, similar to OnePlus 5T. F7 is Oppo’s first device with Android 8.1 based Color OS 5.0. It comes with a useful full-screen multitasking feature – in landscape mode, you can swipe in order to get quick access to the functions to the app or function, and you can open them in a floating window. Other useful features include game modes, iPhone X-style gestures, clone app, split-screen function and screen recording.

“Oppo’s advantage is due to the strong Helio P60 processor and better-customized user interface. Oppo has more premium presence, faster face unlock and benefits with better battery life. Where Vivo is in the rear camera department victory. Vivo  Dual Camera captures a better Bokeh effect. If the camera is your main priority, then you should go to Vivo V9. If you need everything in one smartphone, then Oppo F7 is better.”