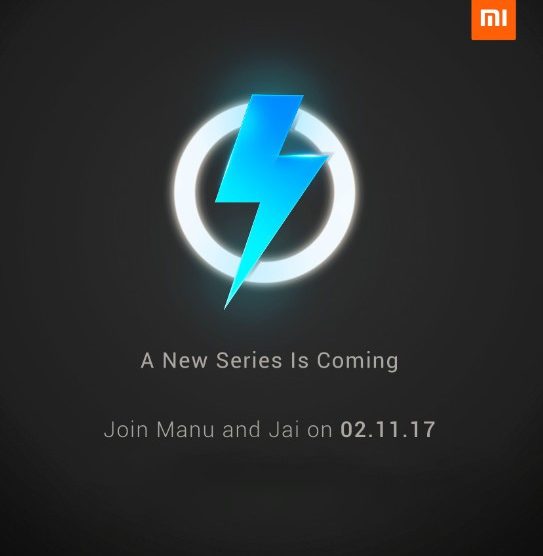 Xiaomi India is all set to launch a new product line in India, which is expected to offer fast charging capability with the new display tech.

Xiaomi India is all set to launch a new smartphone or smart gadget in India on 2nd October. However, as of now, there is no information regarding the exact product that one can expect from the OEM. The press invite just says A new series is coming and join Manu and Jai on 2nd November 2017.

As a matter of fact, Xiaomi India used the same tagline when they unveiled their first non MiUi smartphone AKA the Xiaomi Mi A1 powered by Android One Programme. However, the only hint provided by the invite is the fact that it has a fast charging look alike icon. So, from that point of views, one can go with the assumption that the upcoming smartphone will feature a fast charging capability, which has been missing on the Xiaomi Redmi series as well as the newly launched Xiaomi Mi A1.

Brace yourself, the best selfie smartphone is coming soon! A brand new series ????

So, what can we expect from the Xiaomi? Here are the few options that Xiaomi might launch in India. To start with the list, The Xioami Mi Note 3, which was launched along with the Xiaomi Mi MIX 2 in China, which offers features like 5.5-inch FHD display, dual rear-facing camera with OIS and 4K video recording capability, all glass unibody design (second of its kind in India after Xiaomi Mi 5). The device is powered by Qualcomm Snapdragon 660 Octa-core SoC with 4 GB or 6 GB RAM with 32 GB or 64 GB onboard flash storage without any SD card expansion.

The second thing that one can expect would be the Xiaomi Mi Notebook Pro, which offers top of the line specifications like Core i5 or Core i7 processor with faster GPU, SSD storage and high-resolution camera.

Finally, we would like to end our prediction with the Xiaomi Redmi Note 5, which is expected to feature 18:9 aspect ratio display powered by Qualcomm Snapdragon 630 processor with 3 GB or 4 GB RAM with 32 GB or 64 GB onboard flash storage with a dedicated micro SD card slot along with dual SIM card slot.

Hope Xiaomi comes up with something new that really impress us with the features and the price tag at which it will retail. Share your predictions regarding the upcoming Xiaomi India launch event.