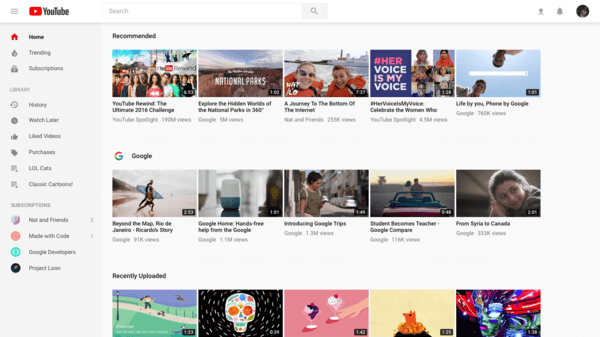 According to some reports, Google is now rolling out the new messaging and sharing features to some  YouTube Web users. This new functionality is already available for mobile app users in the Activity tab of YouTube app. This update for mobile apps was rolled out by Google last August. Now, almost one year later this feature comes from the web version of the service. This new feature is an attempt by the company to ease the sharing of videos among friends and others.

The new update will add a Sharing icon on the YouTube’s website. This icon will be available between the notification bell icon and the apps button. Clicking on this Sharing icon will bring up the recent messages. There is also a Contacts tab that will show all the existing and potential contacts (from the Gmail account through which user is using YouTube).

The video-sharing UI has also been redesigned by YouTube to make it easier for users to share videos. Apart from the embed link and social media sharing options that were already available now users will also see a list of your most recent contacts in a pop-up window. They can click on any of the contacts, write a quick message and hit the ‘send’ button to share the video instantly.

These new features are seen as primarily to increase one-on-one interaction around YouTube videos. Earlier this feature was restricted only for mobile app users. Now it will also make it easier for users to send videos, by reducing the number of steps needed to share.