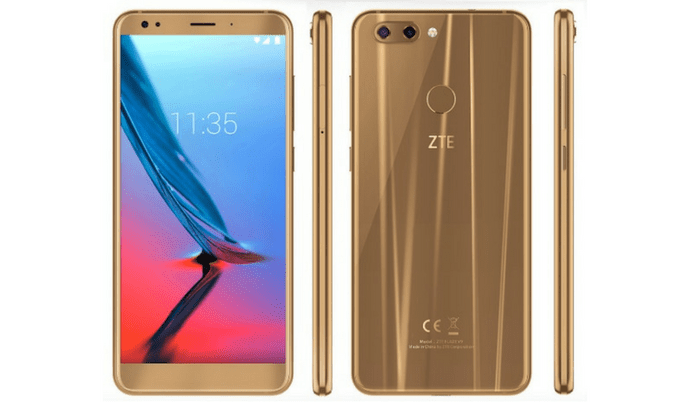 Almost every other smartphone maker has opted for the all-new 18:9 aspect ratio display and now its the ZTE’s turn to do the same. A new smartphone spotted online is the first ZTE smartphone with the new aspect ratio. The smartphone goes by the name ZTE Blade V9 and expected to go live on the CES 2018.

Front the initial inspection, the reflective glass looks dope on its own. We have seen glass-metal-glass sandwich design, but we have not seen anything like this what so ever. The phone looks very appealing and will be an eye-catcher for sure. The phone will be available in Gold and Black colour, which is best of both worlds.

Coming to the tech specifications, this smartphone looks like a premium mid-tier smartphone, which is expected cost around $300 to $400. The ZTE Blade V9 features a 5.7-inch IPS LCD screen with the nearly bezel-less design. The display offers an FHD+ 2160x1080p resolution screen with 400+ pixels per inch. As usual, the display is protected by 2.5D curved tempered glass on the top. However, the document does not suggest the supplier of the glass what so ever. The smartphone is powered by Qualcomm’s newest Snapdragon 450 Octa-core processor, which is a downgraded version of the Qualcomm Snapdragon 625 Oct-core processor found on the most of the mid-tier smartphones of 2017. This processor is either coupled with 2, 3, or 4 GB LPDDR3 RAM and 16, 32, or 64 GB onboard flash storage with a dedicated micro SD card slot (up to 256 GB).

In terms of connectivity, the smartphone offers a dual SIM card slots with 4G LTE and VoLte support on both the slots. Other standard connectivity features like Bluetooth 4.2, Dual channel WiFi, WiFi Hotspot, NFC and 3.5 mm headphone jack are also supported. Like most of the smartphone featuring 18:9 aspect ratio screen, the fingerprint scanner is located on the back of the flushed design.

In terms of camera capability, the ZTE Blade V9 packs a dual camera setup at the back consisting of 13 MP RGB shooter and a 5 MP secondary depth sensing sensor to achieve bokeh effect of varied depth of field. The main sensor offers F/1.8 aperture for the improved low light photography with the capability to record 4K video recording capability up to 30 frames per second. The front-facing 13 MP selfie camera can record 1080p videos up to 30 frames per second.

The smartphone runs on a forked version of Android Oreo 8.0 operating system with plenty of third-party customisation options. Being a 5.7-inch smartphone, it just weights 140 grams, making it one of the lightest smartphone in the market.

Finally, the 3200 mAh Li-ion sealed battery to power the smartphone with fast charging capability. The only thing that sounds outdated on the ZTE Blade V9 is the fact that, it still uses micro USB port for charging and data syncing.

So, what do you think about the ZTE Blade V9? Is this is your dream mid-range smartphone? Share your views in the comment box regarding the same.