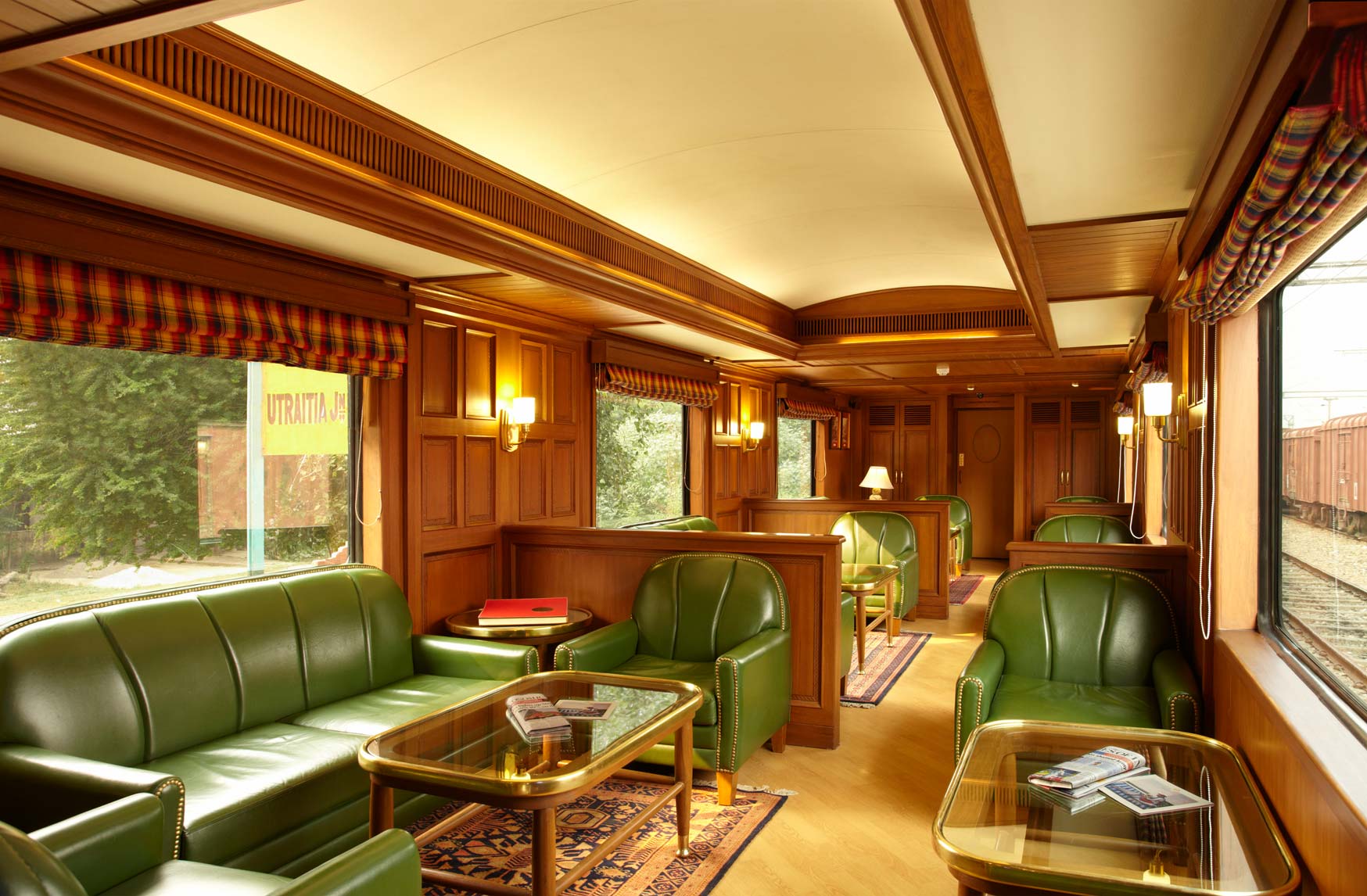 An aristocratic treatment is awaiting you! The luxury train, more of a tourist train, will take you on an unforgettable ride with experiences worth reliving. Right from the unmatched royal decor to the mesmerizing picturesque views, these train journeys will redefine luxury leaving you spellbound and awestruck.

Here is a list of five luxury trains in India.

Launched as an effort by the Indian Railways to promote tourism in Rajasthan, the Palace on wheels lets you explore Jaipur, Chittorgarh, Udaipur, Jaisalmer, Jodhpur, Bharatpur and Agra in 8 Days/ 7 Nights. Starting service in 1982, it was India’s first hotel train and has been gaining popularity ever since. It comprises of fourteen fully air-conditioned deluxe coaches, equipped with world class amenities to give its passengers a pleasurable travelling experience. Each coach is named after former Rajput states aptly matching the interiors of the royal past. It also has two plush restaurants- The Maharaja and The Maharani serving lip-smacking food of various cuisines including Rajashthani and Continental cuisines. The Palace on Wheels promises a truly delightful week in wonderland.

Custom-built train to be the most luxurious train in India and perhaps the world offering state of the art facilities and amenities, Maharaja Express is the most expensive luxury train in Asia. Owned by the Indian Railway Catering and Tourism Corporation (IRCTC), this train started its services in 2010 and has evolved to cater a lavish ‘Maharaja Style’ life on board. It is well acknowledged for its onboard accommodation and dining facilities, service, and off-train excursion program. Currently offering five different itineraries ranging from a three day programme to a seven day tour, covering more than twelve destinations, the Maharaja express is endowing its travellers an extra-ordinary experience of travelling in India. The carriages of the Maharaja Express have been named after the legendary jewels of various Maharajas. This train does true justice to its name.

Named after the Stone Chariot in Vitthala Temple-Hampi, the Golden Chariot takes you on a mystical ride to the historical heritage sites, sun kissed beaches, wildlife sanctuaries and many more magnificent places. Often described as the Pride of South, this train connects the important tourist spots in Karnataka, Goa, Kerala, Tamil Nadu and Pondicherry. The coaches are named after the royal dynasties that have ruled Karnataka over ages. The Golden Chariot is one of the very few train in India to have on board Wi-Fi connectivity, and satellite antennae providing live television service in the cabins. This train ensures its travellers a pure and unadulterated luxury throughout their journey. Gear-up to discover the cradle of stone architecture!

Voted as one of the most luxurious trains in the sub-continent, Deccan Odyssey operates from the state of Maharashtra. Influenced by the imperial carriages used by the Maharajas of the yore for travelling, each of the coaches of this marvellous train is inspired from different royal eras of Maharashtra ruled by diverse dynasties. Exquisite suits, lounge bars and the spa car are a highlight on this majestic train. This venture was jointly undertaken by the Government of Maharashtra and the Indian Railways to boost tourism on the Konkan route. The services on board are provided by the Taj Group of hotels. Deccan Odyssey offers a number of tour packages with well crafted itineraries for a seven day exploration of bliss. This blue limousine on wheels is indeed a perfect blend of Indian royalty and aristocracy with the journeys covering the length and breadth of the enchanting landscapes of the country.

The success of Palace on Wheels inspired the tourism department of Rajasthan to launch another luxury train Royal Rajasthan on Wheels. Launched in 2009,this train is designed and embellished in a contemporary royal style to experience a rendezvous with royalty. This train travels to the most exotic tourist destinations in and around Rajasthan covering various heritage sites, temple towns, national parks and archaeological monuments. This magical journey starts from the capital city-Delhi followed by Jodhpur, Udaipur, Chittorgarh, Sawai Madhopur, Jaipur, Khajuraho, Varanasi, Agra and ends back at Delhi. This train has a special souvenir coach which offers various handcrafted products and apparels which include beer mug, embossed leather jewelry product, cruet set, leather photo frame and various other accessories. This journey will teleport you into a timeless era of the Rajput Warrior Princes who lived a life of luxe and grandeur.

Embark on this royal voyage for the most mesmerizing days of your life!