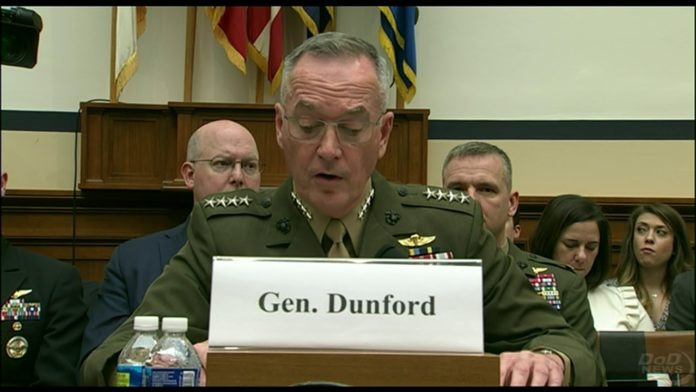 Washington DC, July 10: The United States has said on Tuesday it seeks to create a multinational military coalition in order to safeguard waters surrounding Yemen and Iran.

According to BBC news reports, US military’s Joint Chiefs of Staff chairman General Joseph Dunford stated he wanted to ensure “freedom of navigation” in the waters, which is a significant and important trade route in Gulf.

Washington has put blame on Iran for terror attacks over six oil tankers in months of May and June.

Dunford stated the US was holding dialogues with several nations and its allies who have the “political will” to summon support for its plan.

Washington would offer “command and control” vessels, leading the surveillance efforts. However, the main focus of the other nations would be to offer ships to build patrols nearby and also escort commercial vessels carrying their national flag through the region.

He said Washington would “work directly with the militaries to identify the specific capabilities” which each nation has to back the fresh initiative.

Bab al-Mandab and the straits of Hormuz were strategically vital routes, offering access to the Red Sea and Gulf respectively from the Indian Ocean.

Around a fifth of the crude oil consumed globally, generally passes through the Hormuz strait which connects the Gulf with the Indian Ocean, while oil tankers going towards Europe from the Middle East via the Red Sea, passes must via Bab al-Mandab straigt.

Dunford stated the size of the proposed plan would depend on the numbers of the nations which participates in the initiative.

“With a small number of contributors, we can have a small mission,” he said. “We’ll expand that as the number of nations that are willing to participate identify themselves.”