India adds ten more wetlands designated as Ramsar sites to make a total 64 sites covering an area of 12,50,361 ha in the country. The ten new sites include, six in Tamil Nadu and one each in Goa, Karnataka, Madhya Pradesh and Odisha.

Congratulations to all!#Ramsar declares 10 more sites from India as sites of International importance for the conservation of global biological diversity. This brings the total of Ramsar sites to 64 and the surface area covered by these sites to 1,250,360.41 ha. pic.twitter.com/TQ57kQbYYw

Designation of these sites would conserve and manage wetlands and wise use of their resources.

India is one of the Contracting Parties to Ramsar Convention, signed in Ramsar, Iran, in 1971. India signed it on 1st Feb 1982. So far 64 wetlands covering an area of 12,50,361 hectare have been designated as Ramsar Sites of International Importance from India, till date. 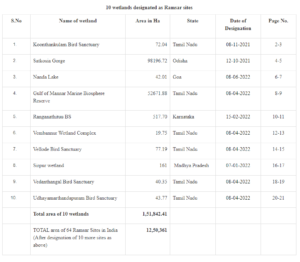 Koonthankulam Bird Sanctuary in Tamilnadu: Koonthankulam Bird Sanctuary is a significant artificial wetland which covers an area of 72.04 ha. It is situated in Nanguneri Taluk of Tirunelveli district of Tamil Nadu. This is the largest reserve for breeding resident and migratory water birds in South India. It is an Important Bird and Biodiversity Area forming part of the Central Asian Flyway.

Satkosia Gorge in Odisha: Satkosia spreads along the magnificent gorge over the mighty river Mahanadi in Odisha. Established in 1976 as a wildlife sanctuary, Satkosia supports a rich ecosystem. It has a diverse population of floral and faunal species. Satkosia Gorge wetland is a mosaic of marshes and evergreen forests.

Nanda Lake in Goa: Nanda Lake is considered to be critically significant for its ecosystem services and biodiversity values for the local communities and society at large. The majority of the area is intermittent freshwater marshes that lie adjacent to one of the major rivulets of the Zuari River.

Ranganathittu Bird Sanctuary in Karnataka : Ranganthittu bird sanctuary is located in Mandya district, of the state of Karnataka, India. The site has been enlisted as one of the Important Bird Areas (IBA) in Karnataka and India by Bombay Natural History Society. It is an ecologically important riverine wetland of India, rich in biodiversity, with 188 species of plants, over 225 species of birds, 69 species of fishes, 13 species of frogs, and 30 species of butterflies.

Vembannur Wetland Complex in Tamil Nadu: Vembannur wetland in Tamil Nadu is an artificial inland tank. Vembannur wetland forms the southernmost tip of peninsular India. This wetland forms part of the Important Bird and Biodiversity Area (IBA) and hence part of BirdLife International Data Zone. About 250 species of birds have been recorded in the district. The site hosts around 12% of the total non-breeding population of garganey.

Vedanthangal Bird Sanctuary in Tamil Nadu: Vedanthangal wetland is one of the oldest bird-protected areas located in Maduranthagam Taluk of Chengalpattu District of Tamil Nadu. This freshwater wetland is a people-protected water bird area, the history of which goes back to centuries where local people have been protecting this heronry and in return, have been benefited by the manure-rich water from the lake that increases the agriculture yield multifold–Liquid Guano Effect.