An earthquake of 4.8 magnitudes, measured on Richter scale, has at early morning hours of April 24 rattled Kathmandu province of Nepal.

According to Financial Express news reports, the earthquake struck off Kathmandu at 6:14 am on Wednesday’s morning, according to European-Mediterranean Seismological Centre (EMSC).

As per the reports of the national emergency operation centre in Nepal, earthquakes measuring 5.2 magnitudes and 4.3 magnitudes on the Ritcher scale has also jolted Naubise in Dhading district around some 6:29 am today and 6:40 am respectively.

Nepal was hit by three consecutive earthquakes, hours after reports Arunachal Pradesh (AP) province of India was hit by an earthquake on early hours of Wednesday. At around 1:45 am, the quake struck off the west Siang region of AP.

5.8 magnitudes of the earthquake in AP has been reported by India’s meteorological department, while the United States geological survey (USGS) informed it was 6.1 magnitudes on the Richter scale. The USGS has said the quake was also felt across the Indian border in Tibet.

However, so far, no reports regarding casualties or damage have been reported. 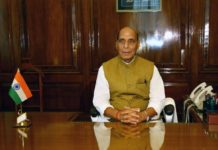