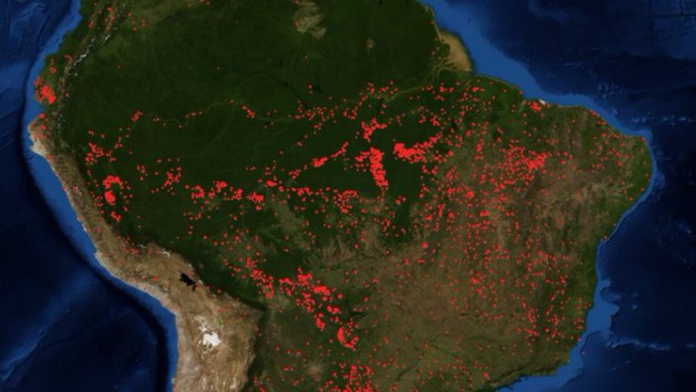 Brazil, August 22: Currently, wildfires are intensively burning the world’s largest rainforest, Amazon, in Brazil that smog from the blaze has extended over the nearby cities and areas in dark mist/cloud.

Amazon Rainforest has marked a record number of endless fires this year with smog captured from space via satellites. The fire has also sparked a blackout over 1,700 miles away, though a few meteorologists suggest the huge smoke came from the massive blaze in Paraguay.

According to National Geographic reports, National Institute for Space Research (INPE) has reported a 72,843-fire record this year, at least 80 percent hike from last year with over 9,000 of these fires being spotted in the last week, multiple media outlets are reporting.

However, the fire’s size is still not clear but, they have gone over various large Amazon regions in northwest Brazil. NASA noted on August 11 the fires were growing larger in the region that could be spotted from space.

“This is without any question one of only two times that there have been fires like this,” says Thomas Lovejoy, National Geographic Explorer and an ecologist, in the Amazon.

“There’s no question that it’s a consequence of the recent uptick in deforestation,“ he says.

Since Brazil’s new president Jair Bolsonaro assumed the office in 2018, Environmental experts have been lifting the alarms/alerts about deforestation in the nation. A major scheme of Bolsonaro’s campaign message called for unveiling Amazon business.
According to the INPE released data earlier this month, it suggested numerous forests have suffered wildfires this summer in Brazil than estimated in the past three years together.
“In the previous years [wildfires] were very much related to the lack of rain, but it has been quite moist this year,” says Adriane Muelbert – an ecologist who has studied how climate change is impacted by Amazon deforestation.

“That leads us to think that this is deforestation-driven fire,” she says.