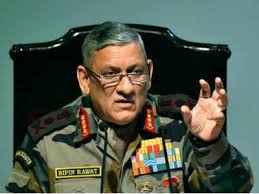 Addressing the press media, Army chief Bipin Rawat said countries like Nepal and Bhutan cannot delink themselves from India “because of its geography”. He warned the countries from taking aid from China saying these ties are only temporary. Further, he said, India has always been a close ally and will always be a dear friend, others (China) will only be a temporary friend.

While replying to a question regarding Nepal’s growing proximity with China, Rawat said, “They cannot delink themselves from India. Countries like Nepal and Bhutan have to be naturally inclined to India because of the geography. Geography favors their inclination towards India and not towards China.”

This year India hosted the BIMSTEC-MILEX-18 in Pune with five out of the seven countries including India, Sri Lanka, Bangladesh, Myanmar, Bhutan participated in the exercise with an aim to increase co-operation between member countries to fight terrorism.

Sitaram Yechury urges CM of 13 states not to implement NRC and NPR; accuses BJP of spreading lies over proposed legislation