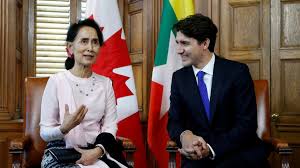 Canadian Parliament unanimously voted to cut Myanmar’s leader Aung San Suu Kyi of her honorary citizenship over handling of the Rohingya crisis. This vote comes after Canadian lawmakers approved a motion of recognizing crimes committed against Rohingya Muslims as genocide.

Aung San Suu Kyi received an honour from Ottawa in 2007,when she was a democracy advocate long under house arrest. Myanmar is condemned for burning fire on human rights and for driving more than 700,000 Rohingya into neighboring Bangladesh of ethnic cleansing.

Canadian parliament’s decision to revoke the symbolic honour was due to a “persistent refusal to denounce the Rohingya genocide”, said Adam Austen, spokesman for Foreign Minister Chrystia Freeland.

“We will continue to support the Rohingya by providing humanitarian assistance, imposing sanctions against Myanmar’s generals and demanding that those responsible be held accountable before a competent international body,” said Austen.