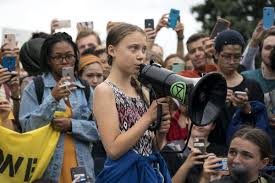 The complaint was filed for not meeting up with the obligations under the Convention on the Rights of Children. The Convention was signed in 1989.

Thunberg had recently accused the global powers of the inaction and slow reactions to the increasing threats of climate change. The United Nations Climate Action Summit is being held in New York.

According to a report in NDTV, the complainants who are children aged eight to seventeen had levied accusations of slow actions and reactions to the threat of climate change which is a violation of the rights of the children.

Currently, the world has been warming up at an alarming rate and the impacts can be seen with the melting of the polar ice caps as well as the glaciers in the mountains. Countries have started arranging funerals for the glaciers in order to create awareness about the impact caused by climate change.

The complaint will lead to a committee investigating the matter and would also provide its recommendation to these countries in order to solve the issue.

Right now the concern to protect the climate has increased as many of the leading powers in the world are major polluters. China, India and the United States are the major carbon-emitting countries.