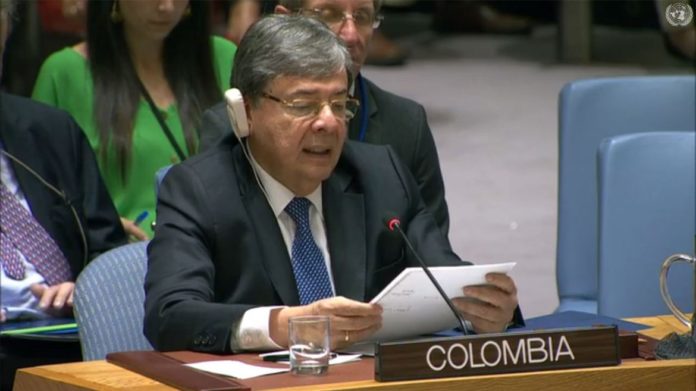 Moscow, June 5: Colombia’s foreign minister Carlos Holmes Trujillo has on Wednesday said the nation does not back any military intervention in Venezuelan internal affairs.

According to Sputnik news reports, the Colombian foreign minister’s statement came when asked if the nation was keen to provide its territories to the United States to initiate a military operation in Venezuela, if Washington decides.

Embattled Venezuelan President Nicolas Maduro has proposed early elections for opposition Juan Guaido-led National Assembly in a bid to renew efforts to calm protesters. The president was quoted by Al-Jazeera news as saying, “We will legitimize the sole institution which has not been legitimized in the last five years.”

In 2015, the last elections were held in which the opposition party led by Guaido had won a majority against Maduro. The next presidential elections are scheduled to take place late in 2020.

Maduro has said the second round of negotiations has been conducted with the opposition in the Norwegian capital, Oslo, noting secret dialogues have been underway for around a couple of months.

Economists have said Venezuela’s fall due to poor governance, corruption and the misguided policies of Maduro and his predecessor Hugo Chavez is the single largest economic collapse outside of the war in 45 years, outpacing Zimbabwe’s crumbling under Robert Mugabe, Cubas disastrous unraveling in the 1990s and the fall of the Soviet Union.

And in recent months, the US President Donald Trump administration has tried to cripple it further by imposing stiff sanctions.