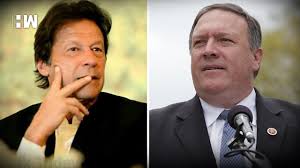 US State Secretory Mike Pompeo arrived in Pakistan for crucial talks with the new government to reset the lost bond between the US and Pakistan. From 5th September 2018, US state Secretary Mike Pompeo will be on his South Asian tour beginning from Pakistan. The visit to Islamabad will be of high level meeting with the newly elected Prime Minister Imran Khan. It is said that the talks between the two will be focused primarily Pakistan’s role on terrorism.

The US State Secretary is accompanied by the US Joint Chief of Staff Chairman General Joseph Dunford and is scheduled to meet the Foreign Minister Shah Mehmood Qureshi and Army Chief Qamar Jawed Bajwa during his short visit in the capital.

The bilateral relations of both the countries have strained since Pakistan’s closure with the Chinese counterpart which has tilted away US from Pakistan. China’s growing influence in the South China Sea and its dominance in the region have made both India and USA relations ties stronger. The meeting will be stratagem for Pompeo as Pakistan is fast falling for china’s Sphere of influence and India is smarting over a series of threats from President Donald Trump.

Pompeo’s visit to Islamabad will be his first meet with the Pakistan Prime Minister today. Last month, a phone call between Khan and Pompeo disputed in denying any discussions on militants operating in Pakistan.

Earlier this week the US, slammed Pakistan by cutting $300 m military aid to Pakistan by further complicating the relations. “This was an inevitable move,” said Michael Kugelman, South Asia expert at the US-based Wilson Center. “For months, US officials had been telegraphing a message of unhappiness about a lack of clear movement on the Pakistani side to address the terrorism issue.”