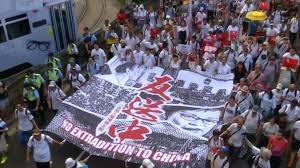 Hong Kong, June 27: Hong Kong has plunged into turmoil again as protesters on Thursday demonstrated marching outside the federal justice secretary’s offices, forcing workers to evacuate and blocking roads, in a latest civil unrest against a controversial extradition bill that was suspended recently, which allows suspects in the territory to be sent to mainland China for prosecution.

According to Reuters news reports, tens of thousands of protesters took it to the streets of Hong Kong in the last three consecutive weeks demanding leader Carrie Lam to immediately withdraw the bill.

Ken Yao, an anti-extradition bill protester, said, “I think this movement is very successful because this time the goal is very clear.”

The armed forces personnel formed a carbon to bar the demonstrators. Protesters held banners such as “Democracy Now”, “Free Hong Kong”, and “Fight of Justice”.

“We know that the G20 is coming. We want to grasp this opportunity to voice for ourselves,” said Jack Cool Tsang, a protester.

Over a thousand protesters have on Wednesday marched to major international consulates calling on world leaders at the coming G20 summit to raise the extremity of Hong Kong with China.

The demonstrators holding “Please Liberate Hong Kong” posters with chanting “Help Hong Kong”, with few wearing masks, have marched to a sequence of consulates which are represented at the G20 summit going to be held in Osaka, Japan, this week.

At the United States consulate, demonstrators handed a petition urging President Donald Trump to “Back Hong Kong at the G20 summit”. They urged Trump to raise the issue of Hong Kong with Chinese leader Xi Jinping, as well as, back the full withdrawal of the extradition bill and set up an independent inquiry into Hong Kong police brutality against marchers.

They also marched to the tconsulate with foreign minister Jeremy Hunt telling parliament on Tuesday London would be banning the sales of tear gas to the territory and also called for an independent investigation into the recent brutality.