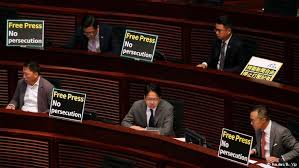 A group of pro-democratic protested at the Legislature Council during an annual address overextension of work visa of a British journalist on October 10. The lawmakers chanted “”Protect press freedom” ” by placing placards in support the said issue. As the lawmakers chanted they were escorted by the security personnel out of the legislature hall.

Dozens of lawmakers including democratic legislators participated in the protest as soon as the leader Carrie Lam entered the Legislature hall.

The visa rejection by the Hong Kong Immigration department was politically motivated. Earlier, the British journalist who is also the vice president of Foreign Correspondents’ Club FCC invited an independent pro-democratic activist as a speaker to an event. His speech was criticized and condemned by the Chinese and Hong Kong officials. To this, the Hong Kong officials rejected the extension of visa approval of the journalist as he is been seen in provoking democratic sentiments.

This move is highly criticized by the USA and the UK government over the said issue.
Moreover, Carrie Lam gave clear notice to the citizens and the people of Hong Kong that all efforts to separate Beijing and Hong Kong will smash.

Hong Kong was under British rule until 1997, when China accepted Hong Kong to remain as an autonomous state with the condition of one country two system policies.

Many pro-democracy movements gave birth out of which the protest of 2014, which is also known as the umbrella revolution.

Despite US Sanction, India to continue to purchase Iranian oil against rupee
Japan to host Mekong summit with South-East Asian Nations in Tokyo
Comment