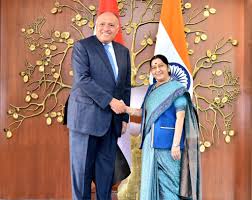 India and Egypt will be holding joint military exercises which will “intensify” their Defence Force drill in days to come. On the invitation by Egyptian Defence Minister General Mohamed Ahmed Zaki Mohamed, Indian counterpart Nirmala Sitharaman, visited Eygpt on September 20-22 to steadfast defence ties between the two nations.

At the conclusion of the official visit by Defence Minister to Egypt, a ministry spokesperson said that the two countries have agreed to step up the Defence ties further.

“The two ministers decided to explore deeper cooperation in the field of Defence Industry and Research and Development, including joint production of Defence equipment.” Both the countries have reaffirmed to mutually take actions on counter-terrorism. Naval cooperation including maritime domain awareness, as identified potential area, the official statement stated.