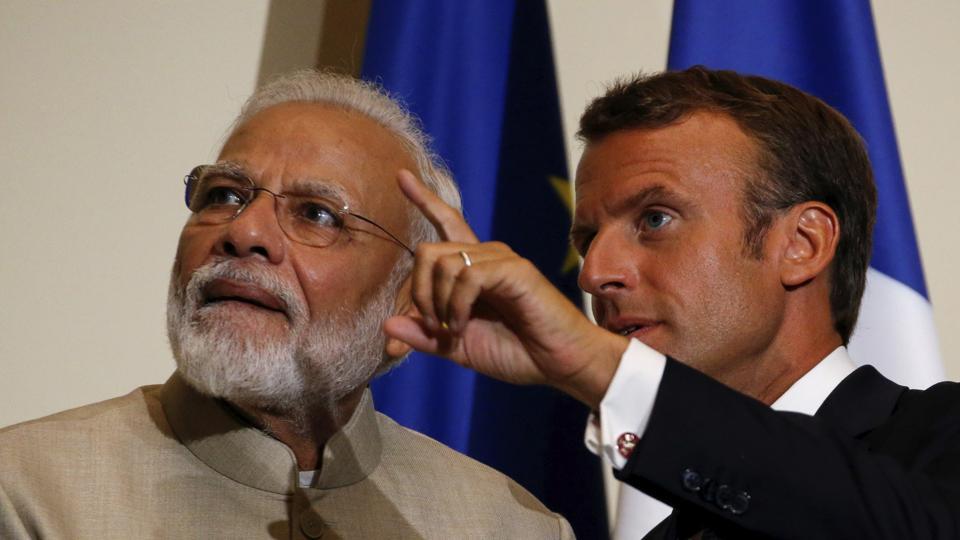 Modi, who arrived in Paris yesterday for a bilateral visit is slated to pay official visits to the United Arab Emirates (UAE) and Bahrain.

Upon his arrival in Paris on Thursday morning, Modi held a bilateral meeting with Macron and discussed wide-ranging issues of mutual interest, according to ANI news reports.

Both leaders issued a joint statement supporting an inclusive Afghan peace and reconciliation effort to put an end to the 18-year-long civil war in Afghanistan leading to a political settlement in the region.

Both leaders agreed the landmark Joint Comprehensive Plan of Action (JCPOA) on Iran’s nuclear power and the UNSC resolution 2231 was required to ensure peace and security in the regionally and internationally and that pertaining situation in Iran need to be solved in a peaceful manner via dialogues, including efforts towards the de-escalation of the Iranian aggression and tensions in the Gulf.

The statement said, “The two counties welcomed the swift implementation of the conclusions of the Joint Strategic Vision of India-France Cooperation in the Indian Ocean region, adopted during the visit to India of President Macron in March 2018.”

Both nations welcomed the establishment of the liaison office of France in the Indian province of Gurugram at the Information Fusion Centre-Indian Ocean Region (IFC-IOR).

Furthermost, the statement added both the nations intended to cooperate their efforts for the Indian Ocean Rim Association (IORA) and implement joint programmes reinforcing assets for fighting piracy and other maritime issues in the Southern part of the Indian Ocean.

It said, “France also intends to work concertedly with Indian at the Indian Ocean Naval Symposium (IONS), over which it will preside from 2020 to 2022.”

It added, “France and India are democratic societies committed to upholding multilateralism. They believe more than ever before in a reformed, more efficient international system adapted to meet the challenges of the 21st century.”

The statement also added France’s wishes to assist India to the Group of 7 summit to better respond to all challenged ranging from climate change, erosion of biodiversity and digital transformation.

“France and India call for reform of the United Nations Security Council that would enable India to gain a permanent seat on it.”

India and France agreed on updating rules and enhancing the modernization of the World Trade Organization, bolster the fair, open, rules-based, transparent multilateral trading mechanism; affirm commitment to strengthen relations between India and the EU on multilateral and strategic issues like innovation, investment and trade.