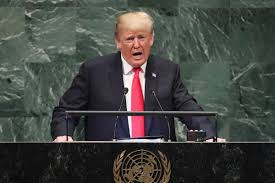 At 73rd General Assembly, US President Donald Trump lauded India’s efforts to raise millions of populations out of the poverty line to middle class group.

“There is India, a free society over billions of people successfully lifting millions out of poverty and into middle class.” Trump said in his second address to the General Debate of the UN General Assembly.

According to UN reports, over a period of 10 years, India has raised its population out of poverty into the middle class. Since 2005-06, as many as 21 million people were lifted out of poverty, with the country’s poverty rate nearly halving falling from 55% to 28%.

During his 35 minute address, Trump said, “It is the question of what kind of world will we leave for our children and what kind of nation will they inherit.”