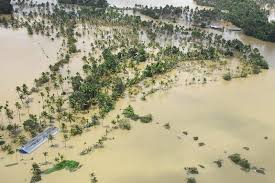 According to the Indian Meteorological Department, heavy to heavy rains are expected to hit the coastal state of Kerala from October 5, 6, 7 respectively. Districts of Idukki, Thrissur, Palakkad are located on the northern and central part of Kerala.

Chief Minister Pinarayi Vijayan advised the fisherman and citizens to remain cautious and alert about the weather updates and take precautionary measures for the upcoming weather.

On his social media, he said “This is likely to develop into a cyclonic storm and a warning has been issued on the same. The predicted trajectory will be along the coast of Lakshadweep”

Precautionary measures are being held at present to tackle up the unforeseen disaster, and necessary actions are taking place by the disaster management team.
The alert comes after a warning issued by the Met dept about a low-pressure area on the Arabian Sea, close to the Sri-Lankan post.

“Tourists have been advised not to travel to hilly regions, especially to Munnar to see the Neelakurinji,” he added.