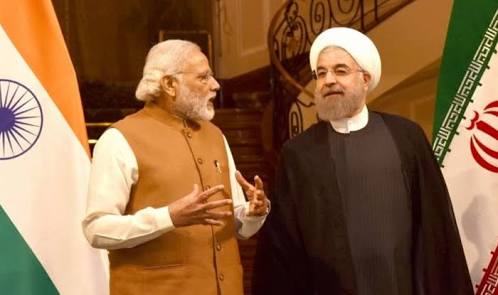 Iranian President Hassan Rouhani’s visit to India, which began on Thursday, could see the two sides seal details of the final take over of operations of the strategically important Chabahar port by India.

Rouhani landed in Hyderabad on Thursday evening. He will be given a state reception and will meet PM Narendra Modi on Saturday. In an attempt to circumvent the banking problems caused by western sanctions on Iran, India will, for the first time, allow investment in rupees in Iran. This is a special arrangement, sources said, which is only allowed for Nepal and Bhutan.

But international financial sanctions remain in place over Tehran, making it difficult for transactions or investment in international currency. “A rupeerial investment arrangement has been allowed by India,” sources said. Rouhani was received at the Begumpet airport by governor of Telangana E S L Narasimhan and minister in waiting, R K Singh. Rouhani is expected to lead Friday prayers at the famous Mecca Masjid in Hyderabad on Friday, before heading to New Delhi.

Chabahar is turning out to be a success story in the India-Iran relationship. With the operationalisation of the port, it is witnessing high activity, and there are unconfirmed reports of traffic being diverted from Karachi to Chabahar.

Connectivity, energy trade and culture are the key pillars of President Rouhani’s visit,”sources said. PM Modi and Rouhani have met twice — once at Ufa and again in Tehran. However, energy relations remain the sticky bit. While Iran remains one of India’s top suppliers of crude, the disappointment has been on the Farzad B field, where OVL discovered gas reserves almost a decade ago, but negotiations with Iran on the development of the field remain stuck.

the coming months, India is expected to host Jordanian King Abdullah and Saudi King Mohammad Bin Salman as well, showing the balancing act that Indian diplomacy has to play in this volatile but important region.