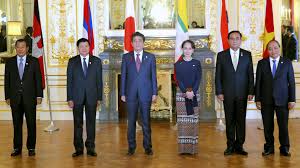 According to the Ministry of Foreign Affairs of Japan, the Tenth Mekong – Japan Summit will be hosted by Japan in Tokyo on October 9, 2018. The meeting will witness official dignitaries from Cambodia, Lao, Myanmar, Thailand, and Vietnam. The set agenda for the summit will be discussed in three areas of Connectivity, People and Environment.

The Mekong Summit comes amidst tensions mounting on regional security over North Korea’s nuclear and missile programs and China’s expansion of military presence in the South China Sea (SCS). To boost economic and infrastructure relations, China’s pet project the Belt and Road Initiative (BRI) is acquiring many countries including the South Asian Region. To counter this move, Japan based its strategic policy as “free and open” which will deepen regional cooperation, free trade and bolster the stability within the Indo- Pacific region. Moreover, as the consequences of the summit, the relationship between Japan and the Mekong region is expected to strengthen.