The Indian Wire » World » ‘Will never let you down’: PM Khan vows Pakistan’s regime change at Capital One Arena address 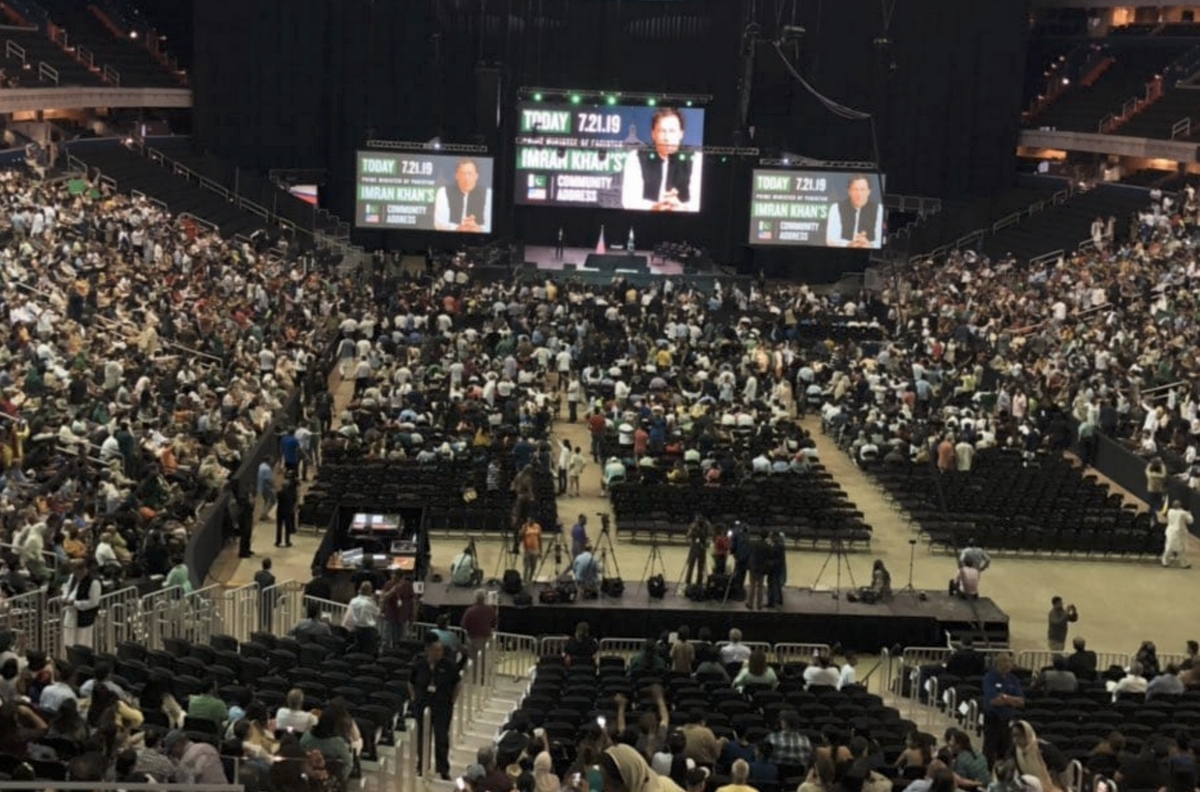 Karachi [Pakistan], July 22: Pakistan’s Prime Minister Imran Khan, who is on a three-day maiden visit to the United States, on early Monday addressed a “record-setting” crowd of Pakistani diaspora in the capital Washington DC.

According to Geo TV, Khan was warmly welcomed at Capital One Arena, during which he said: “We will change the system so that it runs on merit, and where everyone gets an opportunity to prosper.”

The crowd cheered Khan as he reiterated his vow to stem out corruption, calling it a major issue under his political rise. In reference to financial challenges Khan-led government had inherited, he said, “We will pull our country out of its current difficulties.”

Addressing the gathering, PM Imran said:   “I thank you from the heart for giving me so much respect today. I had thought that in Washington we will call 500-1000 people to a hotel and speak to them. I couldn’t even fathom that I would get to speak to you in such a big arena.”

He stated his government was preparing to institute modern subjects in seminaries (Madrassas) in order to let minorities or poor have a better education and economic opportunity. He also underlined the need for enhancing the nation’s tax to Gross Domestic Products (GDP) ratio, as well as, facilitating investments.

The Prime Minister said Islamabad had been inherited with massive human talent and natural wealth, but these political moves incorporated corruption that let the nation stay away from utilizing the same. “There is a difference between a democracy and a kingdom. Democracy honours merit but we have a system that serves the elite,” he added.

Providing an example of Washington where the system recognizes merit, he said, “We want to build a nation. We want to bring a change for the better. Merit will become a reality when we get rid of the rule of families.”

Highlighting the importance of merit, Khan said, “Nations that have gone ahead in the world are those who have achieved progress on basis of meritocracy,” according to The News.

PM said: In dynasties, the son of a King may not necessarily be a good leader. In democracies like the US, it’s the system of merit that lets their people choose their leaders, adding: “There is a reason why the Muslim world has been left behind; the Mughal Empire was at its peak and then went into decline because successive dynastic rulers did not have the capability to lead.

While reiterating his nation’s stance of the national economy’s documentation, Khan cautioned traders would require to pay taxes in order to make Pakistan return the hefty loans – swelled to Rs 30,000 billion from Rs 6,000 billion – during a decade.

He also said previous premiers could return the looted funds if they sought to get rid of prison or wanted to go abroad.

“This is Tabdeeli (change). In Pakistan, the law never accounted for the influential ones. This is Tabdeeli. This will raise the nation and make Pakistan a great country,” he added.

Khan stated his opposition leaders, struggling corruption charges, wanted a National Reconciliation Ordinance (NRO) but however, he wouldn’t rest until his administration recovered all looted national money, specifically referring to imprisoned ex-President Asif Ali Zardari and ex-Prime Minister Nawaz Sharif.
He further announced to pull the “A-class” prison facilities out from Sharif and Zardari and make them settle along with other simple prisoners.

He said, “Pakistan has $200 billion copper deposits, mammoth reserves of coal, but corruption has held us back.”

Khan, who has held numerous meetings with American investors and Pakistani origins, stated his administration would assure a clean system to do business.

“I promise that foreign companies will flow into Pakistan. We will end corruption, attract investment and make progress, we will have industrial growth. We will never ignore Pakistan’s potential,” he added.

He also announced reforms to the nation’s cricket team, assuring the next World Cup community they would view a capable and an efficient team in the sports field.

The prime minister assured Pakistan he would attempt to put forth all cases in front of US President Donald Trump.

“What you want me to say to talk to Trump … I am proud that … now the whole world is saying that Afghanistan has no military solution. Insha Allah, I will put your case before Donald Trump. I will not embarrass you, Insha Allah,” he added.