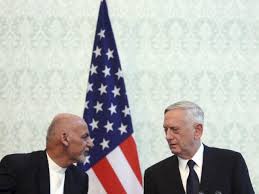 According to a US media, US Defense Secretary State James Mattis landed in Kabul for an unannounced visit on Friday. James Mattis and Marine Gen. Joseph Dunford chairman of the Joint Chiefs of Staff were meeting with Army Gen. Scott Miller, the new commander of NATO troops in Afghanistan.

The ongoing situation in Afghanistan made the Defense Secretary to reach Kabul to have peace talks with the Taliban. Mattis is scheduled to run a town hall meeting with troops, attend a weekly memorial service and meet the senior Afghan leaders, officials said quoted by NBC news.

The Trump administration is trying hard from their side to end the war against the Taliban. The peace talks between the Taliban leaders and Mattis is likely to be analyzed as a possible breakthrough and that the Taliban might be ready to end its war in the exchange for a role in government.