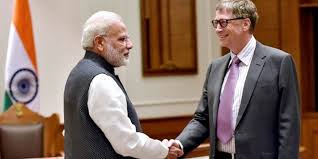 On October 2, with nation marking Mahatma Gandhi’s 150th birth anniversary, it is also been celebrated as four year to the Swacch Bharat Abhiyan. Microsoft founder Bill Gates and co-chair of Bill and Melinda Gates Foundations (BMGF) has praised “Swacch Bharat Abhiyan”, the flagship initiative launched by the Narendra Modi – led government four year ago to improve the sanitization of India.

While speaking at an event in New York, Microsoft founder applauded Indian government’s effort to focus on sanitation as the malnutrition rates in the country are substantially above, given the strong economic growth of the country, according to a report by the Hindustan Times. “And that means a lot in terms of kids not developing their full mental and physical capacity,” Gates added.

On October 2, with nation marking Mahatma Gandhi’s 150th birth anniversary, it is also been celebrated as four year to the Swacch Bharat Abhiyan.

“In urban areas, simply digging a pit doesn’t work and you don’t want to dump it into the river, you want to run it through processing. So, through partners, particularly in India and China, we now have much better processing equipment,” Bill Gates added.