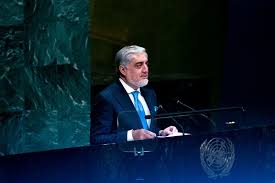 Addressing at the UN Security Council, Afghanistan Chief Executive said that it sees no change in Pakistan on Taliban stance since the newly elected Prime Minister Imran Khan came to power. He further said that Pakistan is still continues to have “significant” influence over the Taliban. Though, time and again Imran Khan has been continuously saying that Kabul and Islamabad will work closely on the Taliban but he hopes to see the real change.
“Real change has not taken place as far as their policies towards the Taliban,” Chief Executive Abdullah Abdullah said at the Council on Foreign Relations in New York.

Last month, Pakistan went to election making Imran Khan as the winning candidate. In his victory speech he mentioned that he will have close ties with Afghanistan and but the reality seems to be differ from his words.

Pakistan has been supplying cash and military equipment in Afghanistan; American officials have repeatedly accused officials in Islamabad, particularly in the intelligence services of supporting militant groups that undermine war efforts.

Since the Soviet-Afghan war, Pakistan has maintained ties with the Taliban as a way to target the Indians and Indian interest and preventing Afghan government from getting close to arch rival India.