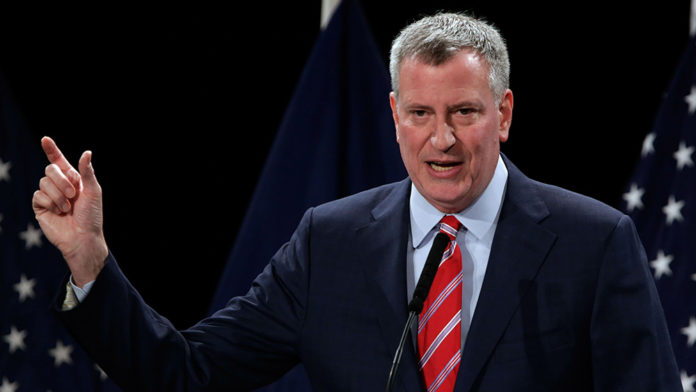 The US president has on Sunday took a dig at the London mayor just before arriving in the United Kingdom (UK) for his first official state visit, labeling Khan as the “twin of de Blasio, except shorter”.

NYC mayor tweeted: “ConDon takes another shot at me. But I’m a total @SadiqKhan stan, so consider any comparison a compliment.”

The tweet then followed up by an edited photo of Trump and conservative politician Boris Johnson together.

Trump attacked the mayor of London, Sadiq Khan, labeling him as “a stone cold loser who should focus on crime in London, not me”, minutes before landing in the UK on Monday.

Previously, Khan had compared the US president’s use of divisive language to “the fascists of the 20th century”.

On Sunday, writing in the UK’s Observer newspaper, Khan stated the UK “should not be rolling out the red carpet” for the US president, where a poll has shown 21 percent of the population had a positive opinion of him with 67 percent holding a negative view. Khan has labeled Trump “one of the most egregious examples of a global threat”.

However, Blasio took no time to tweet a joke over the comparison, stating Trump “is Putin’s twin, only his presidency will be shorter”.

.@realDonaldTrump is Putin’s twin, only his presidency will be shorter. #ConDon https://t.co/eVIMC43vLG

In an interview with The Sun published on Saturday, Trump said, “I think I am really – I hope – I am really loved in the UK. I certainly love the UK.”

….Kahn reminds me very much of our very dumb and incompetent Mayor of NYC, de Blasio, who has also done a terrible job – only half his height. In any event, I look forward to being a great friend to the United Kingdom, and am looking very much forward to my visit. Landing now!

The two leaders have been at loggerhead since some time as the US president accused Khan of employing a “bad job” over handling terrorism in the capital, whereas Khan challenged Trump over climate issues and further blamed him for being part of the right-wing resurgence.