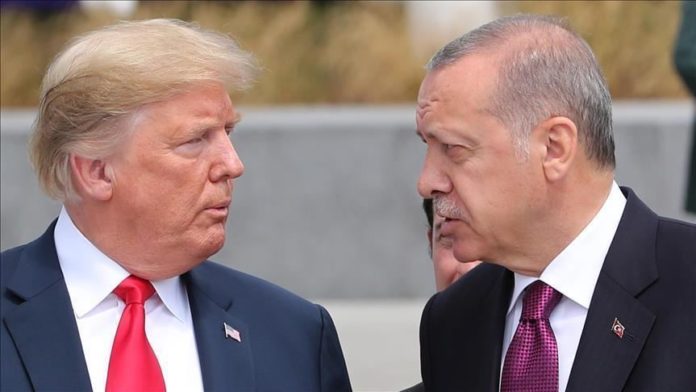 Ankara, August 29: Turkish President Recep Tayyip Erdogan has on Thursday declared Ankara would not permit the United States to postpone the implementation of the agreed “safe zone” in northeast Syria, insisting the agreement was the correction option to be upheld.

On Thursday, a CNN report quoted Erdogan in its publishing as saying Turkey would not support delays in the procedure of plan implementation, as compared to an earlier plan with America to eliminate Kurdish YPG fighters from Manjib, the northern city of Syria, which Ankara had blamed Washington for delaying.

“We will never tolerate a delay as we saw in Manbij. The process must advance rapidly,” Erdogan said.

In an official statement, Erdogan’s communications directorate said Erdogan held talks with President Donald Trump on early Thursday and discussed the ongoing developments in the Syrian province of Idlib region, according to Al-Jazeera news reports.

Last week, Turkey also disclosed the joint-operations hub in the northern Syrian border, where the proposed ‘safe zone’ plan is slated to be implemented, was now fully operational.

The US and Turkey have been at loggerheads over plans for the region, where the US-backed Kurdish YPG fighters, forming a main American force, are combating the Islamic State of Iraq and the Levant (ISIL and ISIS). Moreover, Ankara considers YPG organization a “terror” outfit,

“The agreement which we have reached with the USA is a correct step towards establishing a safe zone and removing the YPG from the east of the Euphrates (river),” Erdogan told reporters after concluding the meeting with his Russian counterpart Vladimir Putin in Moscow.

This week, Erdogan said he would direct Turkish ground troops to enter the planned zone “very soon”, having cautioned previously Ankara would climb up a cross-border offensive by own in order to clear the YPG militants from its northern border if needed.

“All the personnel, the armoured carriers, all are on the border. That is, we are in a position to do everything at any moment,” Erdogan was quoted as saying.

An official in the Kurdish-led coalition has said on Tuesday the YPG would withdraw its forces with heavy armoured weapons from a line along the northern Syrian border with Turkey under the US-Turkey deal.

The YPG have been asked to withdraw from Ras al-Ain and Tal Abyad border positions in coming days, as per the plans to assure the seriousness about the recent discussions, the militia-led authority in east and north Syria said.