Citing that it was a bigger conspiracy planned by the Pakistan army, Punjab chief minister Captain Amarinder Singh said the Pakistani army general Qamar Javed Bajwa had earlier broke the news of opening of Kartarpur corridor to Punjab minister Navjot Singh Sidhu, in fact, Bajwa has told the news before Pakistan prime minister Imran Khan has sworn in as prime minister of the country.

During a press release, Singh said the opening of Kartarpur corridor was pre-planned and was a clear game-plan of the ISI and said that this conspiracy has been hatched by the army of Pakistan against India.

Singh further added saying that Sidhu’s affair has been unnecessarily advertised and those who has raised it, had totally failed to understand the ISI game plan.

Singh said he and Sidhu are not idiots as media has reported and he does not have any kind of problems with Sidhu. Singh further stated that Sidhu always used to speak in a forthright manner and Sidhu’s problem was always that “sometimes he shoots before he thinks”.

Singh said, “Sidhu and I are not at loggerheads and I have absolutely no problems with Sidhu while running the government.”

Captain Amarinder Singh said Imran Khan was undoubtedly willing to hold talks with India and promote peace at the border and with India, but at the same time, Khan should have ensured the killing of Indian soldiers must be stopped immediately. 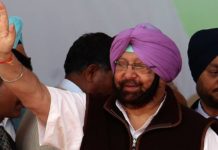