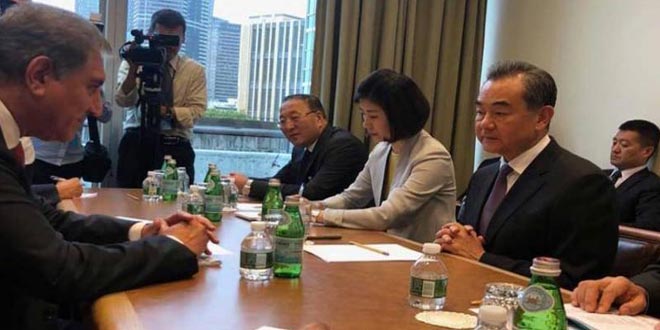 Beijing, August 10: China expressed serious concerns on Friday over the pertaining developments in Jammu and Kashmir after the Indian government scrapped Article 370 removing a special status for J&K earlier this week, escalating tensions in the region.

Pakistan foreign minister Shah Mehmood Qureshi on Thursday rushed to Beijing to hold bilateral talks with its closet ally about the latest condition in Jammu and Kashmir.

Qureshi rushed to Beijing yesterday and held bilateral talks with his Chinese counterpart Wang Yi, Radio Pakistan reported, during which Wang told Qureshi the Kashmir issue needs to be resolved bilaterally in line with a peace according to the United Nations Security Council (UNSC) resolutions.

Qureshi, who arrived over an emergency visit, discussed India’s latest revocation of India-occupied Kashmir’s special status and further briefed him about Islamabad’s countermeasures, position, and view over the issue, according to China Daily.

Wang said China expressed serious concerned about the escalation of tensions in India-occupied Kashmir, adding, “The India-controlled Kashmir issue is a legacy left from the colonial era.”

“It should be properly and peacefully resolved based on the UN Charter, relevant UN Security Council resolutions and bilateral agreement,” Wang said.

“China believes that unilateral actions that will complicate the situation should not be taken,” he added.

The Chinese foreign minister said in line with all-weather strategic cooperative allies, Pakistan and China have backed and understood each other over issues concerning both nation’s core interests.

“Pakistan and India are both China’s friendly neighbors and major developing countries that are in a crucial stage of development,” he said.

“We call on the two sides to proceed from their national development and peace in South Asia, properly resolve historical grievances, get rid of the zero-sum mindset, avoid unilateral action and seek a new path to peaceful coexistence,” Wang said.

Pakistan foreign minister said Beijing has been always Pakistan’s friend and their friendship considered to be rock solid and that Islamabad believes Beijing will support for justice on the Kashmir issue.