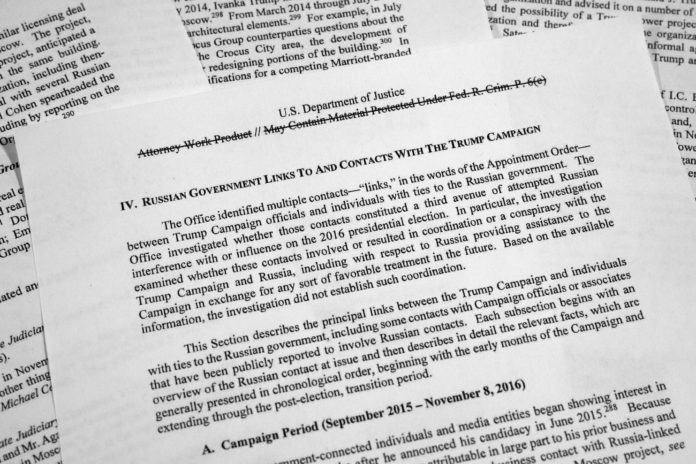 The US department of justice has, on Thursday, released the redacted version of the special counsel Robert Mueller’s probe reports. Though, Mueller didn’t conclude that the US president had committed any obstruction of justice, but also didn’t exonerate him either.

The report is consist of Mueller’s finding from the 22-month long probe into alleged Russia meddling into the 2016 US presidential election, which has seen US President and ex-businessman Donald Trump rising to power.

The investigation was unable to clear United States President Donald Trump in the issue, claiming the president’s move and intent “present difficult issues that prevent us from conclusively determining that no criminal conduct occurred”.

The report titled “Report on the investigation into Russian interference in the 2016 presidential election” stated that Trump already knew he could get benefit from Russian illegal actions meddling into the presidential election campaign but however, Trump did not choose to adopt criminal steps to help.

As per the question over whether Trump’s election campaign had colluded with Moscow in 2016 US presidential election, Mueller wrote, “While the investigation identified numerous links between individuals with ties to the Russian government and individuals associated with the Trump Campaign, the evidence was not sufficient to support criminal charges.”

In a press conference, before the release of the first version of two copies of Mueller’s probe reports, attorney-general William Barr stated: “After nearly two years of investigation, thousands of subpoenas, and hundreds of warrants and witness interviews, the special counsel confirmed that the Russian government-sponsored efforts to illegally interfere with the 2016 presidential election, but did not find that the Trump campaign or other Americans colluded in those schemes.”

Mueller has also made it clear that the US Congress can resume its probe against Trump into this matter.

The report further stated the special counsel’s office was probing whether the US president obstructed justice, Trump ordered his lawyer to remove him from the office.

It said Trump’s efforts influencing the probe were “mostly unsuccessful”, particularly due to “the person surrounding the President declined to carry out orders or accede to his request”.

The second version of special counsel Robert Mueller’s investigation report will get released, the US justice department has reported on Wednesday.

The released report indicated that Trump tries to seize control and influence Mueller’s investigation, also there were not sufficient shreds of evidence for criminal charges against Trump, and that Trump order to oust to Mueller from the office.