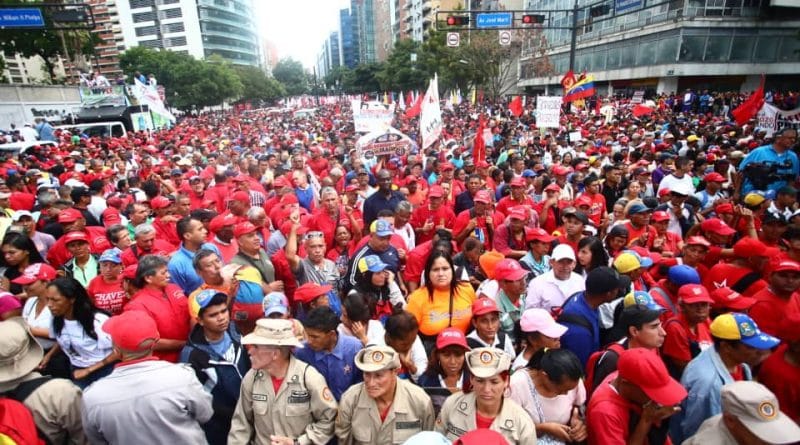 Caracas, July 6: Venezuelans have on Friday held a pro-government and anti-government rallies to celebrate the nation’s independence day, one was led by embattled President Nicolas Maduro, which the other was led by opposition leader Juan Guaido, who proclaimed himself as a legitimate interim Venezuelan president after accusing Maduro’s re-election as illegal and illegitimate.

According to Reuters news reports, addressing a gathering of senior-level military personnel, Maduro reiterated his backing for an ongoing negotiations process between Maduro and rival Guaido, which is being mediated by Norway.

In capital Caracas, while delivering speech ahead of calling on military exercises scheduled on July 24 in order to defend South American nation’s “seas, rivers and borders”, Maduro said, “There is room for all of us within Venezuela.”

He added saying, “We look to the heavens, asking for peace … All the while our military exercises play out. We plead to God with our missiles pointed.”

“The key [in all of this situation] is with the military, and today’s event shows that the military support remains solid and strong,” Luis Vicente Leon, an analyst and economist said.

On Friday, Guaido told reporters: “There is no longer any valid euphemism to characterise this regime other than dictatorship … The systematic violation of human rights, the repression, the torture … it is clearly identified in the [UN] report.”

However, a few citizens expressed disappointment with Guaido’s move this time. A Venezuelan journalist and analyst said Guaido required to keep the citizens animated and out on the streets, but the support has been falling. She said, “I believe diplomatic negotiations are needed, and other kinds of strategy should be adopted.”

On his official twitter handle, the opposition chief wrote, “While the regime is cornered and left alone, we must remain firm and united until victory.”

The Maduro-led government termed “selective” to the reports and stated the UN sources lacked objectivity.

Another Guaido’s tweet read: “We will take responsibility for all the actions we must take to end the dictatorship, we will heed the criticisms and continue in the streets agitating all Venezuela. Attention to the next calls. We continue, stronger and determined until we achieve it.”

Venezuelan deputy foreign minister William Castillo said, “The content of this report is incomprehensible, dominated by a selective and biased vision.”

“It’s a text lacking in scientific rigour, with serious errors in methodology and which seems like a carbon copy of previous reports,” he added.