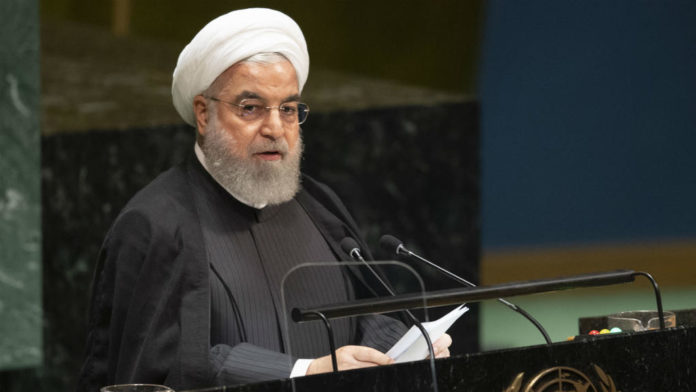 New York, Sep 26: Iranian President Hassan Rouhani on Wednesday warned the Gulf region is “on the edge of collapse as a single blunder can fuel a big fire”, and said the unveiling of a regional peace process is forthcoming, during delivering a speech at the United Nations General Assembly (UNGA) summit in New York.

“Ladies and gentlemen, the Middle East is burning in the flames of war, bloodshed, aggression, occupation and religious and sectarian fanaticism and extremism,” Rouhani said.

He also invited foreign nations to join a security coalition of “Hope” for the Gulf region. However, he insisted peace in the Gulf region is not impossible through international interventions.

“The security of our region shall be provided when American troops pull out,” Rouhani said. He added, “Security shall not be supplied with American weapons and intervention.”

In reference to US troops stationed in different nations fighting for regions’ peace and stability, Rouhani said, “The security of Saudi Arabia shall be guaranteed with the termination of aggression to Yemen, rather than by inviting foreigners.”

The Iranian president’s comment comes after US President Donald Trump directed the Pentagon to deploy additional American troops to the Middle East on Friday in order to bolster security and defence around the Kingdom of Saudi Arabia.

Citing terrorist attacks in Afghanistan, though the American troops are stationed there, Rouhani said, “Such a government is clearly unable to resolve more sophisticated issues of today.”

He said, “Our region is on the edge of collapse, as a single blunder can fuel a big fire,” after calling on the US to withdraw troops and called on Riyadh to end fatalities in Yemen.

Rouhani, referring to US allegations against the Islamic Republic over the latest drone attacks on Saudi Arabia’s Aramco oil plants – which Iran has denied, told world leaders present at the UN summit: “We shall not tolerate the provocative intervention of foreigners. We shall respond decisively and strongly to any sort of transgression and violation of our security and territorial integrity.”

Rouhani said the US has failed to resolve the issues surrounding Afghanistan, Iraq and Syria, accusing Washington of being supporters of extremist, Taliban-ism and Daesh-ism and who have been unable to resolve more sophisticated issues of today till date.