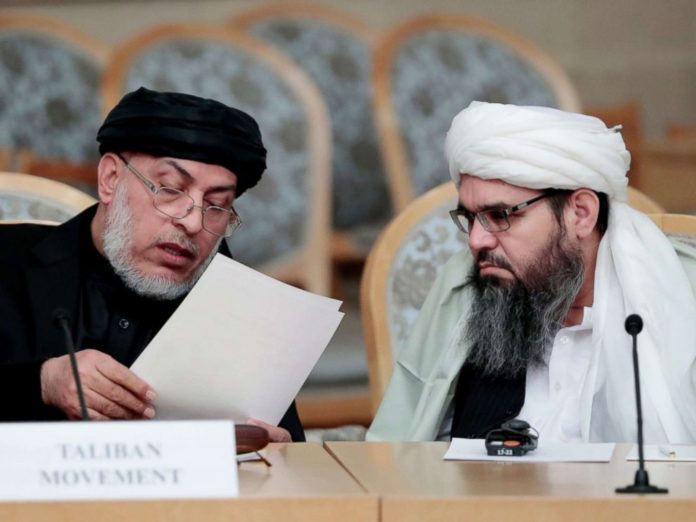 Beijing, Sep 23: A delegation of Taliban representatives on Sunday met Chinese special envoy for Afghanistan reconciliation in Beijing and discussed the Afghan Peace Process with the United States, said Suhail Shaheen, a spokesperson for the insurgent group.

In this tweet, Shaheen wrote: “The nine-member political office of the USA The Emirate traveled to China, under the leadership of political Vice President Mullah Baradar Akhundsieb, and met with Chinese Special Envoy Mr. Aidan Shiju and his delegation to Beijing today.”

The development comes in the midst of President Donald Trump’s cancellation of US-Taliban peace talks earlier this month, post Taliban announcement it was behind the terror attacks in Afghanistan’s capital Kabul.

On Sep 7, Trump, in a series of tweets, confirmed he was calling off the secret negotiations with the group’s representatives and Afghanistan President Ashraf Ghani at Maryland’s Camp David in the United States.

“The Chinese special representative said the US-Taliban deal is a good framework for the peaceful solution of the Afghan issue and they support it,” Shaheen wrote.

Mullah Baradar, the head of the Taliban delegation, said they had held dialogues with the Chinese team and also reached a “comprehensive deal”, Shaheen tweeted.

Shaheen tweeted: “Mullah Sahib Brother also said that we held talks to resolve the Afghanistan issue and reached a unilateral agreement. Now if the American president refuses to listen to his promises and promises, he will be responsible for any bloodshed and bloodshed in Afghanistan.”

“Now, if the US president cannot stay committed to his words and breaks his promise, then he is responsible for any kind of distraction and bloodshed in Afghanistan,” Baradar said.

On Sep 8, Taliban said Trump’s move would lead to a further loss of US assets and lives. “The Americans will suffer more than anyone else for cancelling the talks,” a statement said.

The Taliban also condemned United States President Donald Trump’s announcement of the suspension of ongoing peace negotiations with the insurgent group to put an end to 18-year-long civil war and crisis in Afghanistan and termed Trump’s decision as an “anti-peace” move.