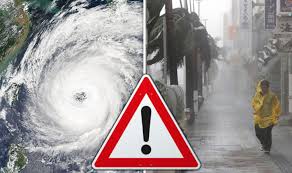 A massive typhoon ‘Trami’ strikes the island nation of Japan forcing cancellations of flights and trains including the Tokyo city. Evacuations orders were issued for tens of thousands people over widespread area which includes more than 2, 50,000 people in the city of Tokushima on the island of shikoku.

According to the meteorological department, Trami is slowly weakening as is will continue to bring damaging winds to much of central and northern Honshu as well as Hokkaido.

Winds over 120 mph will be possible which would cause major damage while flooding rainfall and mudslides remains a concern. Flights, bullet traim, roads were block due the massive storm which struck the country.

Major airports throughout airport including Tokyo’s Narita and Haneda cancelled flights from to and from the city. The storm destroyed power lines on the southern islands of Okinawa on September 30.