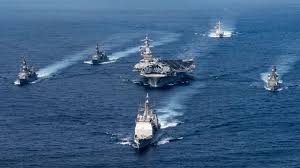 China has on Friday, rebuked the America’s alleged move to send naval vessels close to China at disputed island of South China Sea – island where Beijing is on a mission to construct military installation.

Li said, “We urge the US to strengthen the management of its vessels and aircraft that pass by Chinese territory to prevent unexpected events.”

During addressing a press conference, foreign ministry spokesperson Geng Shuang said due to this action by US, a diplomatic complaint has been lodged against the US, warning the US to “immediately stop such provocative actions that violate China’s sovereignty”.

China claimed that parts of islands are claimed by the Philippines, Taiwan, Brunei, Vietnam and Malaysia.

China has started an operation to build up reefs, which will be capable of hosting military planes, into the artificial islands. This naval operation by US was the second operation to irk China.

A diplomatic protest prompted through these kinds of action, was the third operation this year.

This issue has been raised ahead of the G20 summit in Argentina between US President Donald Trump and China President Xi Jinping.