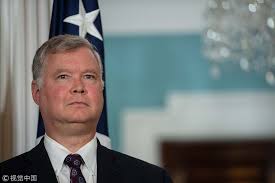 According to the US officials, Stephen Biegun, special representative for North Korea will be travelling to the cities of South Korea, Japan, and China from September 10-15 to discuss the denuclearization in the Korean peninsula.

Stephen Biegun “will meet with his counterparts and continue diplomatic efforts to achieve the final, fully verified denuclearization of North Korea as agreed to by Chairman Kim in Singapore,” the State Department said in a statement on Thursday, Xinhua reported.

Currently, due to the difference in the scale of denuclearization between the US and North Korea, the talks between the two countries has been delayed over the issue of war ending declaration.

The State Department said last month that the denuclearization of the Korean Peninsula shall happen before the US signs a war-ending declaration with North Korea; while North Korea has argued that such a document is the first step towards peace on the peninsula, whereas Washington has said it is too early to discuss the topic.

US media reported earlier that the signing of a joint declaration to formally end the Korean War was one of the verbal agreements between US President Donald Trump and North Korea’s top leader, Kim Jong-un, when they met on June 12 in Singapore.

Kim told South Korea’s envoy on Wednesday that he firmly supports and will be devoted to completely removing the danger of armed conflicts and the horrors of war from the Korean Peninsula and turning it into a cradle of peace without nuclear weapons and free from any nuclear threat.

Trump tweeted later on Thursday in response, thanking Kim for making such a statement and noting that “we will get it done together,” referring to the denuclearization of the Korean Peninsula.

At the conclusion of the historic Trump-Kim summit in June, the two sides issued a joint statement, in which they agreed to improve bilateral relations and work together to build a lasting and stable peace regime on the peninsula.