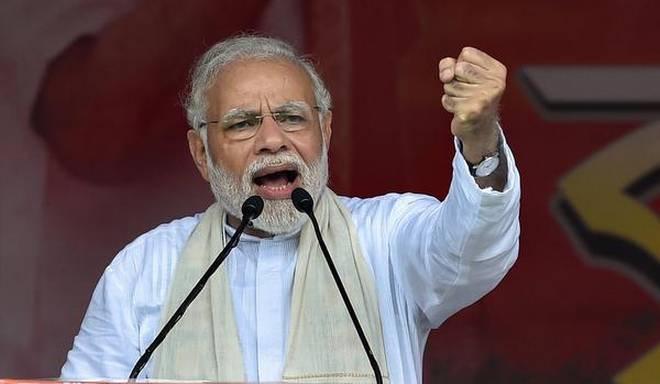 Sri Lankan Prime Minister Ranil Wickremesinghe has on Thursday congratulated Indian Prime Minister Narendra Modi as his Bhartiya Janata Party (BJP)-led NDA government looks all set for the 2019 Lok Sabha election victory and to form a government at the centre for the second time.

In a tweet, Wickremesinghe wrote: “Congratulations to @narendramodi on a magnificent victory! We look forward to working closely with you.”

Congratulations to @narendramodi on a magnificent victory! We look forward to working closely with you.

Thank You @ibusolih for your warm wishes. India greatly values its relations with Maldives. I look forward to working closely with you to further strengthen our multifaceted partnership. https://t.co/sW5lDDDdc4

“I extend warmest congratulations to Prime Minister @narendramodi ji for landslide election victory in the Lok Sabha Elections 2019. I wish all success ahead. I look forward to working closely with you,” Nepal Prime Minister Oli tweeted.

PM Modi tweeted back to thank PM Oli for his wishes on electoral victory and wrote: “Thank you PM @kpsharmaoli for your warm wishes. Nepal and India have been close friends and neighbours since time immemorial, nurtured by our strong people-to-people bonds. I look forward to continue working with you to take India-Nepal relationship to ever greater heights.”

Russian President Vladimir Putin has called on PM Narendra Modi to congratulate him for the victory in the 2019 Lok Sabha Elections for the second straight term.

The President tweeted: “Congratulations to Prime Minister Narendra Modi on a strong mandate from the people of India. The government & the people of Afghanistan look forward to expanding cooperation between our two democracies.”

Congratulations to PM @narendramodi on a strong mandate from the people of India. The government and the people of Afghanistan look forward to expanding cooperation between our two democracies in pursuit of regional cooperation, peace and prosperity for all of South Asia.

The King of Bhutan, Jigme Khesar Namgyel Wangchuck, held a telephonic conversation with PM Narendra Modi, during which the King congratulated Modi for his BJP’s victory in the 2019 Lok Sabha Elections.

Chinese leader Xi Jinping on Thursday congratulated PM Narendra Modi for his victory in the 2019 general elections and vowed to cooperate with Modi and take India-China bilateral ties to a new height.

Pakistan Prime Minister Imran Khan on Thursday congratulated Indian Prime Minister Narendra Modi for the victory in the 2019 Lok Sabha Elections for the second straight term and said looking forward to working with Modi for prosperity, security, and peace in South Asia.

I congratulate Prime Minister Modi on the electoral victory of BJP and allies. Look forward to working with him for peace, progress and prosperity in South Asia

PM Modi thanked Italian Prime Minister Giuseppe Conte for wishes on win in polls and said India values ties with Italy and it will continue to strengthen the relationship for mutual benefits.

Thank you for your kind words @GiuseppeConteIT.

India values the relationship with Italy and we will continue to bring our two countries closer for mutual benefit. https://t.co/n30HtFXHem

The Prime Minister of Portugal, Antonio Costa, congratulated PM Narendra Modi for his electoral victory and vows to make sure to rise India-Portugal relationship to a new level.

PM Modi replied back to Costa to thank him for the wishes and said India is committed to working closely with Portugal.

Thank you for your wishes @antoniocostapm !

I remain firmly committed to work closely with you to further strengthen our bilateral cooperation in the coming years to the benefit of our citizens. https://t.co/53Y28RSxUZ

Thank you @ScottMorrisonMP for your warm greetings. I look forward to continue working closely with you to further strengthen the strategic partnership between India and Australia. https://t.co/Pv3KNDfxMo