New Delhi: Ministry of Fisheries, Animal Husbandry and Dairying said that Avian Influenza (AI) has been confirmed in wild birds in the states of Madhya Pradesh, Uttrakhand, Delhi, and Rajasthan.

The AI was found in cows and pigeons in Burhanpur, Rajgarh, Dindori, Chhindwara, Mandla, Harda, Dhar, Sagar, and Satna districts of Madhya Pradesh, in crows and kite in Dehradun district of Uttarakhand; Rohini in Delhi (crow) and Jaipur Zoo in Rajasthan (Duck and Black Stork).

Moreover, cases of AI in poultry have been confirmed from Anand/ Bhagirath Kalosiya in Harda district of Madhya Pradesh and G.S. Poultry farm Balod district of Chhattisgarh. Altogether, 11 states in the country have been affected by AI, informed the Ministry of Fisheries, Animal Husbandry, and Dairying.

The Animal Husbandry Departments of the States, UTs, Secretary (DAHD) has also written to the Chief Secretaries, Administrators of states, and UTs that AI is not new to the country but has been reported every year since 2006. The country has been effectively controlling the disease. It was reiterated that the virus gets destroyed easily at 70 degrees centigrade and therefore, properly cooked poultry and poultry products are safe for human consumption. Accordingly, states have been requested to instruct the authorities concerned not to impose a ban and allow the selling of areas/states poultry products sourced from AI-free areas and states. 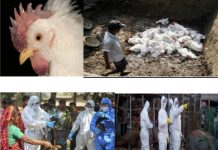 Ministry of Fisheries, Animal Husbandry & Dairying gives a status report of Avian Influenza in the country