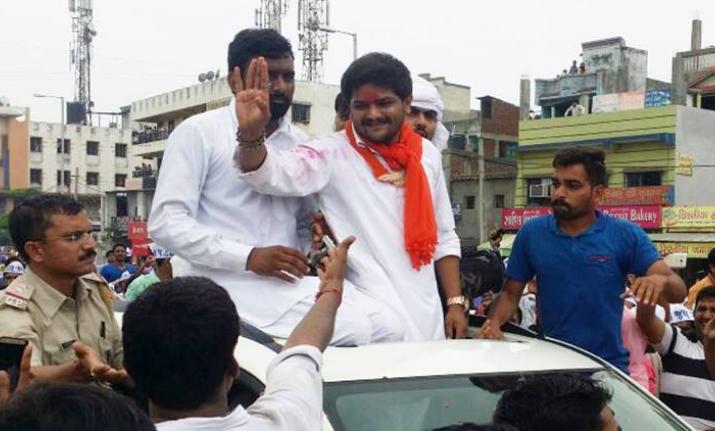 Patidar quota agitation spearhead Hardik Patel has finally openly announced that the Patidars are happy with the three options provided by the Congress for the resevation to the community. Though he said that the final call will be taken by Tuesday evening, after holding the discussion with the community’s supreme bodies, the Umiya Dham and the Khodal Dham.

Patel till now had kept the momentum ticking that he might extend his support to the Congress in the upcoming Gujarat assembly election, though he had never made any official announcements regarding this.

In his previous statements, the Patidar leader had always said that he will support the party who agrees to fulfill the demands of the Patidars. He had also said that his decision of whether or not supporting Congress came later, but one thing he was sure of was that he would definitely work towards defeating the BJP.

The Patidars have been one of the oldest vote banks for the ruling BJP in Gujarat, but past few years, the rift between the two has been considerably increased. The Patidars have been long since fighting to get a reservation for education and jobs under the OBC quota, but the BJP government in the state did not pay a heed to their demands. Which resulted in the Patidars protesting against the BJP and taking a pledge to defeat the ruling government in Gujarat.

Meanwhile, Congress very tactfully took the advantage of the widening distance between the Patidars and BJP. The opposition worked day and night to find all constitutional possible solutions to grant the demands of the Patidars. According to the BJP, it was constitutionally not possible to give 20% reservation to the community under the OBC category, as the 49% quota allocated by the constitution was already utilized.

To counter this situation, Congress came up with a solution to this, which will not hamper with the 49% quota and also fulfill the demand of the Patidars. A late night meeting was held on 8 Nov, during which, senior Congress leader Kapil Sibal gave the three options to the members of the Patidar Anamat Andolan Samiti (PAAS) convener Dinesh Bambhania.

He had said that without disturbing the 49% reservation quota allowed by the constitution, the only way to give 20% reservation to the Patidars under the OBC quota is by introducing a new reservation. Sibal said that according to the Article 31 of our Constitution, such provisions have been provided, according to which the state government can make new laws to fulfill the constitutional responsibilities in its state and The court cannot interfere in the changes made by the state government through constitutional proposition.

After the meeting the PAAS seemed content with the proposal, however, it had to be discussed with the Patidar leader Hardik Patel, before coming to conclusions.

As per the latest updates, Patel has said that the community is satisfied with the suggestion of the Congress, and will take the final call by today evening. He also said that “There are various judgments of the Supreme Court through which reservation can also be given to Patidars while remaining within the ambit of the Constitution.”

After studying the various documents given by the Congress, regarding the possibilities of the Reservations, Patel said that it was a misconception that reservation cannot go beyond 50 percent. “I held a detailed discussion with core PAAS members about the options given to us by Congress. After going through various documents and judgments, I now firmly believe that their formula is right,” he said.

The Patidar leader in order to make his point even stronger, giving past examples regarding the reservations. He said that “In one instance, the SC said that quota can’t go beyond 50 percent. But, another judgment had said reservation beyond that limit can be granted by conducting a survey. Patel community in Madhya Pradesh was included under OBC quota in 1994. Similarly, Patidars in Gujarat can also get a reservation.”

It is going to be a  tough battle for the BJP, and the party will be facing a hard time, trying to save its thrown, over which it has been ruling for 22 years. The Gujarat Assembly election is not just a matter of pride for the BJP but has also become a matter of prestige. The fact that the Modi wave is gradually fading, is not hidden, as the people have slowly started turning their backs to the Prime Minister Narendra Modi after his decisions of note ban and GST.

The Gujarat polls are very crucial as its results will pave the way for the Lok Sabha elections due in 2019 and will also decide the fate of BJP, whose goal is to colour the entire nation saffron. If the Congress nails the victory in Gujarat, the dream of BJP of a Congres-mukt Bharat will be far from achieved and also this will surely give an indication as to what is the wish of the people for the 2019 polls.