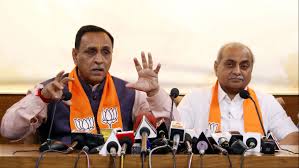 GANDHINAGAR:  Gujarat Deputy Chief Minister Nitin Patel did not assume office in the Sachivalaya in Gandhinagar on Friday even as many ministers took charge.

Patel expressed his displeasure with the portfolios assigned to him. He wanted home and urban development but neither was given to him.

“The Dy CM, who had made his displeasure known to the top leadership over key portfolios being taken away from him on Thursday, was told that his grievance would be resolved in two days. Patel is adamant that if his bosses do not keep their word, he will quit on the grounds that his self-respect is being hurt,” said a top source close to the development.

The other two important portfolios revenue and finance were also taken away from him, making him the biggest loser visibly in the allotment of portfolios

The tension between him and CM VijayRupani was quite evident at a press conference that they addressed at 10 pm on Thursday.

Patel, who is generally a chatterbox, didn’t say a word and sat through the event with a long face and avoiding eye contact.

Sources said that Vadodara MLA and former minister Rajendra Trivedi confronted Rupani and Vaghani at the Chief Minister’s house over not including a single MLA from Vadodara in the cabinet.

He threatened to quit along with 10 other MLAs. Leaders from south Gujarat also dished out similar threats.

Officially, all lips were sealed. “There is no dispute or differences between any leaders to my knowledge. If there is any problem, we will sort it out,” said BJP state president Jitu Vaghani.

All of this comes amid a bad performance that brought BJP tally to 99. In the countdown to the 2019 lok sabha polls, it does not augur well for Prime Minister Modi.

Questions are being raised from within the BJP itself over how long the government may last.