The Indian Wire » Politics » Analysis : Betting too much on young leaders to backfire for congress? 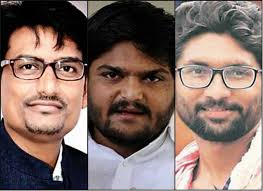 GANDHINAGAR:  Hardik Patel, Alpesh Thakor, and Jignesh Mevani — young guns from Gujarat, who shot to fame by polishing their nonpolitical credentials have jumped on the political parade at the first possible opportunity, upsetting the apple cart. The reasons why they discarded their apolitical anchor may be different but it may not be advantageous to Congress, which had gained political capital by bagging the support of the Young guns.

Jignesh has filed his nomination as an independent candidate from Vadgam while Alpesh has been fielded by Congress from Radhanpur, with strategy Congress backing. Before announcing his support for Congress, Hardik — who can’t contest because he is underage, ensured that his supporters are fielded by the party. But the buck stops there.

Besides this, aggressive members of PAAS have arm-twisted Congress to agree to their demands of changing candidates in several seats a fact which has not gone down well with Congress workers. Congress’ over-indulgence of PAAS has led to strong disaffection among some Congress workers who are in no mood to work for the Patidar candidates.

While Patidar youths have put up a great show for PAAS favored candidates, enough to the chagrin of Congress workers, the ripple effect of this exercise has contented the Congress grassroots workers and are turning complacent, leaving the electioneering exercise to PAAS.

There are 7% of Dalits scattered across the state,  made him a long way to cover before emerging as a Dalit leader from Gujarat. However Mevani seldom enjoyed mass support like Hardik and Alpesh, but he hogged his limelight because of his good communication skills.

However, with little or no transferable votes to his advantage, his filing of nomination from Vadgam has only angered Congress workers, who view him as an outsider to the constituency. This works in favor of BJP as Congress has not fielded any candidate against Mewani.

The formulation of KHAM enabled congress its biggest ever electoral win with 149 seats in 1985.  But it also caused serious detachment of Patidars and other general category voters, keeping the party out of power in the state since then.