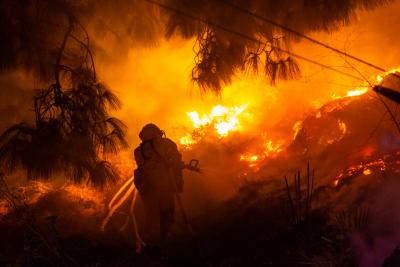 Australian firefighters on Tuesday have said that “catastrophic” conditions like a rise in temperature, dry environment and strong winds have complicated the dowsing of the raging bushfires in New South Wales and Queensland.

Presently, more than 50 fires have continued to burn in the two states since last week, reports Efe news. The blazes have also claimed the lives of three people so far.

Areas close to the city of Sydney were on alert due to its proximity to some bushfires.

New South Wales’ Rural Fire Service commissioner Shane Fitzsimmons, warned of the difficulty of controlling the blazes and urged people in high-risk areas to leave their homes before the situation worsened.

“The edge of the fire that’s burning is being driven by the hot, dry winds coming down the ranges and influencing the fire behavior,” Fitzsimmons told national broadcaster ABC.

According to the predictions of the Australian Bureau of Meteorology, the maximum temperature will reach as high as 37 degrees Celsius on Tuesday with gusts of wind over 65 km per hour.

More than 3,000 firefighters, with the help of volunteers and 60 aircraft loaded with water, fight blazes along a 1,000-km stretch on the east coast of Australia.

The flames have already devoured 200 buildings and about 100 people have been injured, including 20 firefighters.

The fire season in Australia varies by area and weather conditions although they are generally recorded in the austral summer (between the months of December to March).

In recent years, bushfires in Australia – which this year has also suffered a severe drought – have increased in intensity, with many experts linking it to the effects of climate change.

The worst fires in the oceanic country in recent decades occurred in early February 2009 in the state of Victoria, leaving 173 people dead and 414 injured, as well burning an area of 4,500 sq.km.