The Indian Wire » Entertainment » “You can not replicate someone like Madhuri Dixit” : Jacqueline Fernandez on recreating ‘ek do teen’ Ever since we’ve known Jacqueline is going to dance to Madhuri Dixit’s popular dance number ek do teen for the upcoming movie Baaghi 2, we have been waiting to get Jacqueline’s take on the same. Now that the song has finally wrapped, Jacqueline  has termed this new rendition of the song as a tribute to Madhuri.

Jacqueline is overwhelmed by this chance happening. She said, “I feel really blessed that I have been given this opportunity by director Ahmed Khan, Sajid Nadiadwala and master ji Ganesh Acharya. I always knew that I never ever would be able to match up Madhuri Dixit and that’s not even something I am going to even attempt because you can not replicate someone like Madhuri Dixit. There is only one Madhuri Dixit and I know that this is just my tribute to her.”

When asked how did it make her feel initially, Jacky replied, “I think that was my first stress that how can we recreate something so iconic like ‘is it even possible’. It made a lot easier for me when I understood that it’s not possible, we are not trying to match up to what Madhuri Dixit and Saroj (Khan) ji did”. 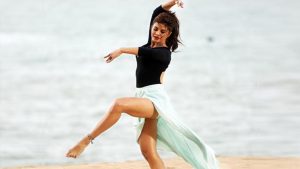 Jacqueline also stated that a lot of her colleagues told her that they envy the kind of opportunity she has gotten. She is all praise for the makers of the original song. According to Jacqueline, “We are honestly here as big fans of their work and more than anything, this is honestly a tribute to the amazing, iconic number that they gave to us. For me as an actress, this is such an honour and a lot of my actress friends were like, ‘we are so jealous that you doing ‘Ek do teen’. So for any girl this would be a dream song to do.”

Jacqueline has also been in contact with Madhuri to get a fair deal of understanding of the song from our original Mohini. She informed, “I have connected with Madhuri ji. We will be chatting little more about how the song went once it done because right now, I am under lot of stress. My only focus over the past week has been this one song and of course, they (Madhuri and Saroj Khan) will be the first persons to whom we will show the song. We have already taken their blessings.”

Jacqueline will soon be seen in Remo D’Souza directorial Race 3 alongside Salman Khan.